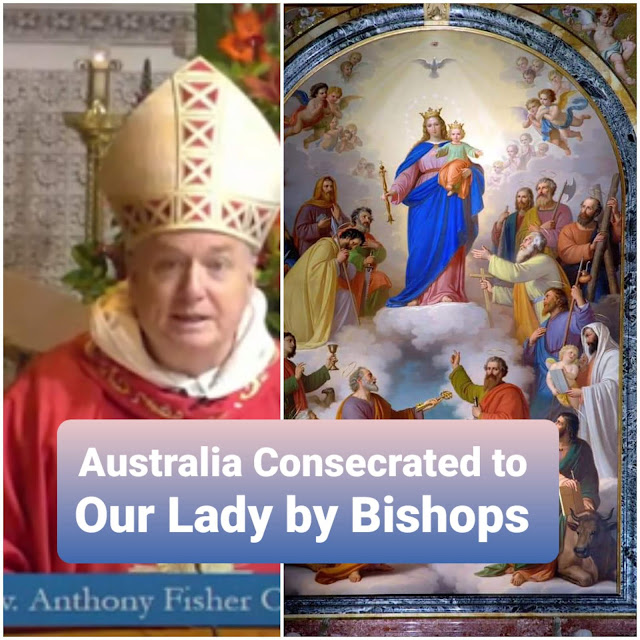 The Bishops of Australia released a motion to consecrate the country to Our Lady: “That the Australian Bishops entrust Australia to the Immaculate Heart of Mary under the title Our Lady Help of Christians, seeking her intercession for the safety of all our people especially in this time of COVID-19 pandemic.” Mary Help of Christians has been the official patroness of Australia since 1844. Her feast day is celebrated on May 24, which this year coincides with the Feast of the Ascension. The entrustment of Australia to Mary Help of Christians can therefore take place on the 24th or the 25th, the bishops agreed. In various parishes throughout the country prayers of consecration were recited. (see picture below)
Here is the Homily from Archbishop Anthony Fisher, OP from St. Mary's Cathedral in Sydney, Australia on that day of Consecration.
Years ago I saw a very beautiful image of The Virgin Mary at Prayer in the Dominican church of St Clement near the Colosseum in Rome. When I got back home, I discovered the same painting in the National Gallery of Victoria in Melbourne. Was I seeing double? Had I stolen the painting and brought it back with me to Australia? No, both were painted by Sassoferrato (Giovanni-Battista Salvi 1609-1685, a great baroque artist but also a copycat, even a cheat. He’d do almost identical images for different patrons and then tell them all that theirs was the original! It turns out there’s a third version of the same painting in Santa Maria della Salute in Venice. And another in the Auckland Art Gallery. Another ‘original’ is one of the most popular paintings in the National Gallery in London. You can also get it as a coffee mug,  a T-shirt or, oddly, as a beach towel! 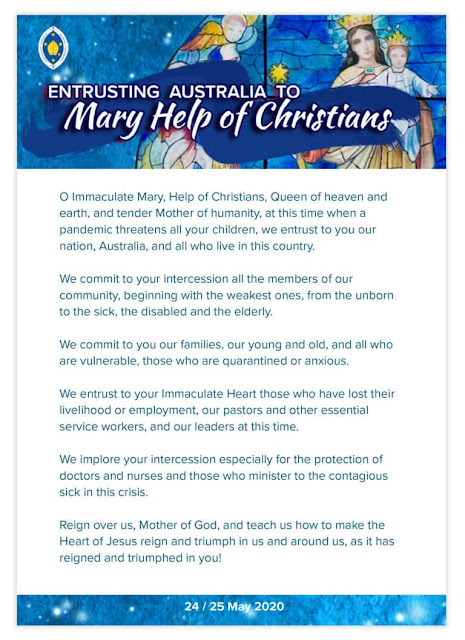 A person in a blue cup

Description automatically generated
In all these images, Mary is a young Italian beauty with a perfect complexion and hands together in prayer. Over her red tunic is a cloak of striking ultramarine, made from grinding the semi-precious stone lapis lazuli. She is holy yet human, and she’s unique – except that there are lots just like her…

…which captures, I think, something of the heart of Mary, Help of Christians. We know that she never sinned, was full of grace, received Christ into her womb, was overshadowed by the Holy Spirit, brought Jesus up. Such holiness might have made her seem aloof and distant. Yet, she’s very much one of us, and so in the Sassoferrato paintings she wears ordinary clothes (for those days), she prays like we do, and she has no halo. Her story is that of a human mother, who in the words of our first reading today “brings up her sons and cares for those who seek her” (Sir 4:11-18). Throughout history, right back to the Wedding Feast of Cana, people in difficulty have asked Mary for help: they’ve sought her intercession. Because she’s one of us, a mother to us, we turn to her in our need; but because she’s the best of us, mother to Our Lord, she gets those prayers answered.

So Mary is holy yet human, and attracts our devotion as ‘Help of Christians’. She is also unique. After Adam and Eve and Jesus, she’s the only human being made without original sin. As our first reading put it, she’s loved and honoured and held close by all who love God. She’s an original, yet there are potentially many just like her: for every one of you boys is called to be a saint too. If one of us, could remain sinless all her life, despite having all the temptations and the difficulties we have, then we too can choose, each time we choose, what is good and true and beautiful, as she did. By God’s grace you can do that! And when you fail, when your painting cracks and has flaky bits, you can return to her Son, the Master Painter, to be restored in Confession, to be made new. You can indeed all be originals – different in your temperament and gifts – but beautiful souls, with high ideals, virtuous character and good choices like her. There can be a whole art gallery of such works, the real St Mary’s College, the communion of saints!

In this morning’s Gospel Jesus is dying (Jn 19:25-27). Joseph is long dead and there are no other children. So Jesus asks John to take His mother in. That Jonno would only have been 15 or so, and so he was likely to outlive her which was helpful. More importantly, when all the other disciples abandoned Jesus, he stayed. No wonder he was Jesus’ favourite, ‘the disciple He loved’ (Jn 13:23, 19:26, 20:2, 21:7, 21:20). But it’s not just about John. ‘The disciple Jesus loved’ is code for us, too. We are Jesus’ favourites. We must take Mary into our hearts also. She will be a mother to us, especially in hard times, as that first reading says, “through winding paths, fear and faintness, through times of plague, sore discipline and ordeal”.

When Fr John Joseph Therry arrived in Australia, two hundred years ago this month, he petitioned the governor for a site for a Catholic chapel. The establishment; the powerful people in Sydney at the time, responded by giving him the garbage dump near the convict barracks and the Hyde Park vegetable patch. No-one then imagined what a prime site St Mary’s would turn out to be!

A group of people standing in front of a building

Description automatically generated
When Therry was at school Napoleon and his secularist forces invaded Italy, determined to suppress the Catholic Church. They took Pope Pius VI as prisoner and he died in captivity. The next Pope, Pius VII, was forced to attend Napoleon’s coronation in 1804, when Napoleon decided he wanted to be called “Emperor” now and not just “General”. And when Napoleon famously took the crown from the Pope’s hands and crowned himself and his queen as well. Things only went downhill from that low point. Pius VII was a prisoner for six years; the whole six years that John Joseph Therry was a seminarian. He called on all the Church to pray the Rosary. Soon after Therry was ordained the dictator emperor was defeated and the Church free again. Pope Pius VII gave thanks by adding the Feast of Mary, Help of Christians, to the general calendar.

So when Fr Therry arrived in the colony, he dedicated the first Catholic church just here to her. After all, Catholics had had it hard in Australia: Mass was very rarely permitted in the previous 32 years; many were convicts in chains and hard labour, poor or powerless. They needed help. They needed the best of helpers, Mary Help of Christians.

With the arrival of Bishop Polding in 1835 this little church; the mother church of Australia became the first cathedral. In 1844 at the First Provincial Synod of Bishops, and again in 1885 at the first Plenary Council of Australasia, the nation was dedicated to St Mary, Help of Christians. That was renewed by the Bishops of Australia in 1988, in 2001, and today in this time of pandemic.

Like those early Catholics, we know we need help; we need God’s help. And it can’t hurt to have God’s Mum in our corner! So today we pray together for Mary’s guidance and protection in difficult times. We pray she’ll make us more like her, beautiful and colourful artworks, worldly and other-worldly, different yet like her in our openness to God, our active service of others, our pondering what’s good, our fidelity to the end.

Our Lady of Help of Christians, pray for us!
Source: https://www.sydneycatholic.org/
Posted by Jesus Caritas Est at 1:26 PM