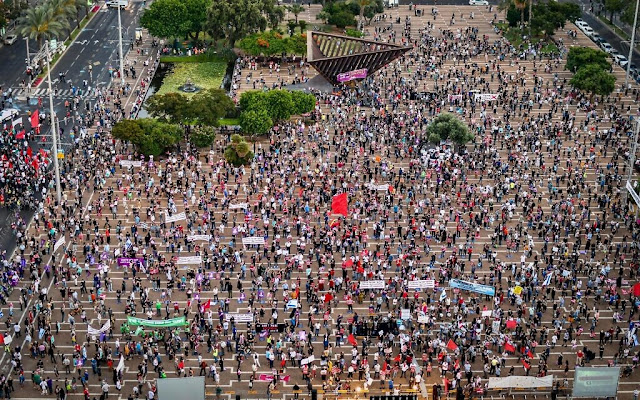 Asia News report: Thousands of Israelis take to the streets against annexation plans in the West Bank
For the second time in two months, citizens demonstrate against Prime Minister Netanyahu. Amid Palestinian and Israeli flags, the demonstrators sang "no to annexation, no to occupation, yes to peace and democracy". But half of Israelis are in favor. Netanyahu calls the killing of an autistic Palestinian by the police a "tragedy".


Tel Aviv (AsiaNews / Agencies) - Thousands of people took to the streets over the weekend to protest Prime Minister Benjamin Netanyahu and his government, who intend to pursue the controversial annexation program for occupied territories in the West Bank.

On the evening of June 6, respecting the distancing measures imposed by the Covid-19 emergency, citizens promoted a protest for the second time in less than two months.

Wearing masks and respecting the minimum distance of one meter, the demonstrators gathered under the slogan "No to annexation, no to occupation, yes to peace and democracy". Defying the bans of the police, who tried to block the demonstration, several people in the square waved Israeli and Palestinian flags.

The new Israeli executive, the result of the agreement between Prime Minister Netanyahu and opposition leader Benny Gantz, has among its objectives the plan of annexation of the territories; a plan that worries the Christian leaders of the Holy Land, who speak of "serious and catastrophic" policy, which enjoys the support of the United States in the context of the controversial "Agreement of the Century", the peace plan drawn up by the Trump administration.

Among the promoters of the protest in Tel Aviv are groups of the left, which in the last period have regained strength after a long absence from the political and social landscape of the country. However, the demonstrations do not appear to be the beginning of a mass movement against Israeli politics and leadership, which remains firmly in the hands of the right led by Netanyahu. The organizers also released a video message from US Democratic Senator Berni Sanders, who recalls the importance of "fighting for justice and fighting for the future we all deserve".

A recent poll shows that about half of Israelis strongly support the government program. Hoping to receive the (almost obvious) green light from the White House, the Prime Minister has set the start date of the plan for the annexation of the Israeli settlements and the Jordan Valley to the West Bank on the first of July.

Meanwhile, Prime Minister Netanyahu commented on the killing of a young Palestinian with autism problems by the police last month, calling it a huge "tragedy". 32-year-old Iyad Halaq was shot dead on 30 May in the occupied area of ​​East Jerusalem while going to a special school for people with psychomotor problems. The agents suspected he was carrying a weapon and therefore opened fire, killing him. In reality he was unarmed and had no threatening intentions.

Yesterday, for the first time, the head of government commented on the episode offering his condolences to the family and invoking a thorough investigation to ascertain the responsibilities. The Israelis, he said during a government meeting, share the "pain" of the Halaq family. "This man with [autism] limits was treated as a suspect, believing he was - and wrongly - a terrorist while he was in a sensitive area" of the city.
FULL TEXT Source: AsiaNews.it
Posted by Jesus Caritas Est at 12:00 PM