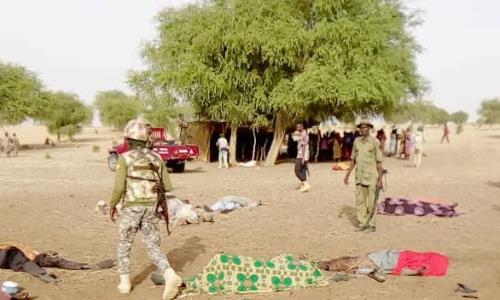 Credible sources and residents told the Daily Trust that the attack, which was launched around noon, lasted two hours before the terrorists retreated.

Besides the people killed, the attackers reportedly killed over 300 cows and rustled nearly 1000.

It was gathered that the terrorists invaded the community 24 hours after attacking commuters along the Monguno highway.

Residents, who spoke to our correspondent, said many people also sustained injuries.

One of the sources said many people were missing after the attack.

But a source from one of the leading international organisations working in the northeast, the head of one of the vigilante groups, a source from a credible NGO and a public affairs analyst all confirmed the attack in Gubio.

"It is the most deadly attack in recent times," one of them said. "The location of the village made rescue mission a bit difficult," he said.

"Many people were killed and others missing because the attackers waylaid the village in broad daylight, surrounded it and opened fire," another source said. On his part, the vigilante official said 69 dead bodies were counted. "These exclude those that are missing... More about the attack will come to the fore tomorrow (today)," he said.
Edited from All Africa - Image Source: Google Images - The Nigerian Voice
(Raw disturbing video from the aftermath of the attack - Viewer Discretion advised)