#BreakingNews Churches and Cathedral in Mexico Vandalized during Protests 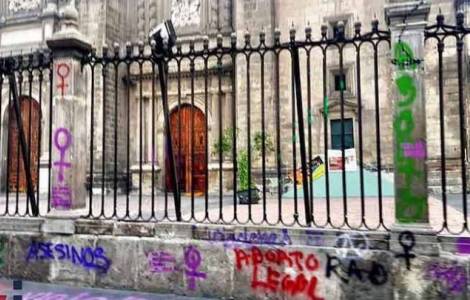 AMERICA/MEXICO - Violence against churches and state institutions, "young people are moved by cowardly leaders" denounces Mgr. Cabrero
Tuesday, 9 June 2020
2020-04-18
(Below is Raw Video from Reuters from Mexico during the recent protests:)
Xalapa (Agenzia Fides) - The Cathedral of Xalapa, in the Mexican state of Veracruz, and the Expiatory Temple of the Sacred Heart of Jesus, known as "El Beaterio", were vandalized during a presumably protest march against police repression, which took place yesterday, June 8th. About fifty anarchists caused damage to various public and private buildings in the center of Xalapa, among them radical feminist groups.
Among the writings that the vandals painted in places of worship: "pedophiles", "oppressive state", "rapists" and "war against the state".
Demonstrations against police violence have been taking place in Mexico for a week, following an initiative that started from the United States. But in Mexico, demonstrations have become a cause of devastation and gratuitous violence against institutions. According to the local press, 5 churches have been vandalized since 1 June in Xalapa.
On Sunday 7 June, the Archbishop of San Luis Potosí, Mgr. Jesús Carlos Cabrero denounced the violent events in the historic center that occurred on the previous Friday, in particular near the Public Prosecutor’s office and the State Congress. The Archbishop said that the people who committed damage to these properties were primarily minors who should not have been there; who are moved by cowardly leaders who do not show their face and who, based on the economic need of these people, motivate them to commit vandalism and promote social disorder: "They throw people away, leaders hide. I do not understand what the children were doing right there", he said.
Mgr. Jesús Carlos Cabrero assured that this social phenomenon derives from the domino effect that began in the United States with the death of an African American person at the hands of the police. In Mexico it happened in Guadalajara and, now, several states are joining protests against police abuse. "It has touched Guadalajara and it has now touched us, what we have to say is to anticipate and be in constant contact with the movements", he concluded. (CE) (Agenzia Fides, 9/6/2020)