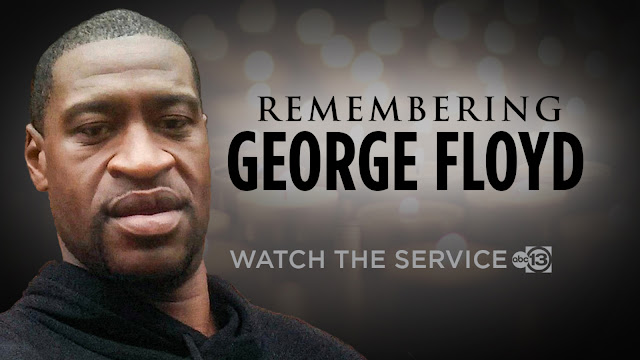 Hundreds attended the private funeral service in a Houston church for George Floyd. There were also 3 public events in as many states to commemorate Floyd who was killed on May 25, 2020.
The 46-year-old father, and sports fan known as Big Floyd cried out for his mother and pleaded he couldn't breathe as a white Minneapolis police officer pressed his knee on Floyd's neck on May 25. The video of the incident ignited protests and  violence in cities across the U.S. and around the world.
George Perry Floyd, age 46, was born in Fayetteville, North Carolina, and raised in Houston, Texas. In 2014, he moved to Minneapolis, Minnesota. Floyd had a six-year-old daughter named Gianna who lives with her mother, Roxie Washington. Floyd had four other children, including 27-year-old Quincy Mason Floyd, who visited the memorial site in Minneapolis last week.

A GoFundme account has raised over $13 Million for the Floyd family.
"George Floyd was not expendable. This is why we're here," Democratic Rep. Al Green of Texas told the crowd at the Fountain of Praise Church. "His crime was that he was born Black. That was his only crime. George Floyd deserved the dignity and respect that we accord all people just because they are children of a common God."
In the video below Rev. Mary White delivered a powerful prayer of comfort for those in attendance at the funeral.


Following the funeral, Floyd's body was to be taken by horse-drawn carriage to a cemetery in suburban Pearland, Texas, where he was to be laid to rest next to his mother.

Mourners also included Rep. Sheila Jackson Lee from the Houston area, and the city's police chief, Art Acevedo. Nearly all the pews were full, with relatively little space between people.

Dozens of Floyd's family members, most dressed in white, were led into the sanctuary by the Rev. Al Sharpton, the civil rights activist.

In a video eulogy played at the service, former vice-president Joe Biden, the Democratic presidential candidate, said,"No child should have to ask questions that too many Black children have had to ask for generations: Why?" He continued, "Now is the time for racial justice. That is the answer we must give to our children when they ask why."

The funeral came one day after about 6,000 people attended a public memorial Monday in Houston.

Over the past six days, memorials for Floyd were also held in Minneapolis, where he lived in recent years, and Raeford, North Carolina, near where he was born.

Four Minneapolis officers were charged in connection with Floyd's death, which was captured on video by bystanders.

Calls for police reform have come up in many communities, and people around the world have taken to the streets in solidarity, saying that reforms and dialogue must not stop with Floyd's funeral.