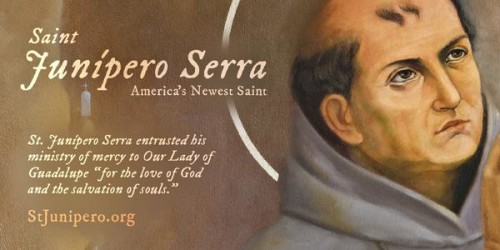 Born at Petra, Island of Majorca, 24 November, 1713; died at Monterey, California, 28 August, 1784.
Born at Petra, Majorca, Spain, November 24, 1713, a son of Antonio Nadal Serra and Margarita Rosa Ferrer who spent their lives as farmers, Junípero Serra was baptized on the same day at St. Peter’s Church and was given the name Miguel José.
In Petra, Serra attended the primary school of the Franciscans. At 15-years-old, he was taken by his parents to Palma to be placed in the charge of a cathedral canon, and he began to assist at classes in philosophy held in the Franciscan monastery of San Francisco.
Serra was admitted as a novice at the Convento de Jesús outside the walls of Palma on September 14, 1730, and made his profession on September 15, the following year. He chose the name Junípero in memory of the brother companion of St. Francis. He studied philosophy and theology at the Convento de San Francisco. The date of his ordination to the priesthood is not known, though it probably occurred during the Ember Days of December 1738.  Serra obtained his doctorate in theology in 1742 from the Lullian University, Palma. He was called to the Scotistic chair of theology at the same university as primary professor in January 1749 to become an Indian missionary in America.
On April 13, 1749, with Francisco Palóu, Serra sailed for America. He landed in Vera Cruz, Mexico on December 7, 1749. Although horses were supplied for the friars, Serra elected to walk the 250 miles between Vera Cruz and Mexico City. They reached San Fernando College on January 1, 1750, spending the previous night at the Shrine of Our Lady of Guadalupe.
In less than six months, an urgent call came for volunteers for the Sierra Gorda missions. Serra was among the volunteers. During his apostolate in Sierra Gorda with the Pame Indians between 1750 and 1758, Serra not only oversaw construction of a church, which is still in use, but developed his mission in both religious and economic directions. Under his presidency of the missions (1751-1754), the missionaries of the other four towns also built mission churches.
Serra learned the Otomí language and used a visual method of teaching religion. Zealous in preaching and in promoting both liturgical and popular devotions, he succeeded in bringing the Pame people to practice the faith in an exemplary way. Economically his mission prospered through the introduction of domestic animals, the fostering of agriculture, and the development of commerce. He also defended Indian rights against non-native settlers in a protracted contest over the valley of Tancama. During building operations on his church, he worked as an ordinary day laborer.
He was then assigned to the college of San Fernando, where he arrived September 26, 1758. There he was made choir director, master of novices from 1761 to 1764, college counselor from 1758 to 1761, and a confessor. As a home missionary Serra preached missions in Mexico City, Mezquital, Zimapan, Río Vero, Puebla and Oaxaca. In 1767, he was appointed president of the ex-Jesuit missions of Baja California.
He set out in mid-July and reached Loreto on April 1. Serra resided at the former Jesuit headquarters and assigned missionaries to the 15 missions between San José del Cabo in the south and Santa María in the north. Serra enthusiastically volunteered in 1768 to join expeditions to Upper California. On March 28, 1769, Serra left the mission at Loreto on mule-back, arriving at San Diego on July 1. En route, he founded his first mission at San Fernando de Velicatá on May 14. Serra kept a diary of his journey during which he suffered greatly from an infirmity in his legs and feet and had to be carried on a stretcher.
Serra devoted the next 15 years of his life to evangelical work in Upper California. During that period he founded nine missions: San Diego, July 16, 1769; San Carlos, Monterey-Carmel, June 3, 1770; San Antonio, July 14, 1771; San Gabriel, September 8, 1771; San Luis Obispo, September 1, 1772, San Francisco, October 9, 1776; San Juan Capistrano, November 1, 1776; Santa Clara, January 12, 1777; and San Buenaventura, March 31, 1782. He was present at the founding of Presidio Santa Barbara, April 12, 1782.
Serra remained at San Diego until April 14, 1770, when he embarked for Monterey. From June 3, 1770, until his death, he maintained his headquarters at Mission San Carlos. Serra died at Mission San Carlos, August 28, 1784, at the age of 70 and is buried in the floor of the sanctuary of the church he had built. By the end of 1784, Indian baptisms at the first nine missions reached the number 6,736, while 4,646 Christianized Indians were living in them.
Serra was small of stature, five feet two inches in height. He had a sonorous voice, swarthy skin, dark hair and eyes. Though it appears that he had a fundamentally robust constitution, he suffered a great deal during the latter part of his life. His first affliction was the swelling and painful itching of his feet and legs from mosquito bites which caused varicose ulcers. At times he could neither stand nor walk. After 1758 he began to suffer from asthma.

In character Serra was eager, optimistic, zealous, dynamic, even adamantine. Primarily a man of action, he preferred the active apostolate to the classroom or to writing. He remained a model religious despite his distractions and activity — a man of prayer and mortification. He had a consuming love for his American converts. He fought for the freedom of the Church against royal infringement. Serra was considered by some too aggressive, zealous, and demanding. Though he defended the Indians, he had a paternalistic view and believed in and practiced corporal punishment.
The cause for Serra’s beatification began in the Diocese of Monterey-Fresno in 1934, and the diocesan process was finished in 1949. On September 25, 1988 he was beatified by Pope John Paul II. Pope Francis canonized Junipero Serra on September 23, 2015. during a Mass in Washington, DC.
Serra monuments and memorials dot his Camino Real from Majorca to California. He is the subject of several dozen biographies in various languages. His writings with translation have been published in four volumes by Rev. Antonine Tibesar, OFM. He is known as the Apostle of California. Serra International was established in his honor. His life and his mission system are studied in California schools.
Edited from the official biography at https://sbfranciscans.org/about/blessed-junipero-serra