Saint June 14 : St. Methodius I of Constantinople a Patriarch and Defender of Images during Iconoclast Period 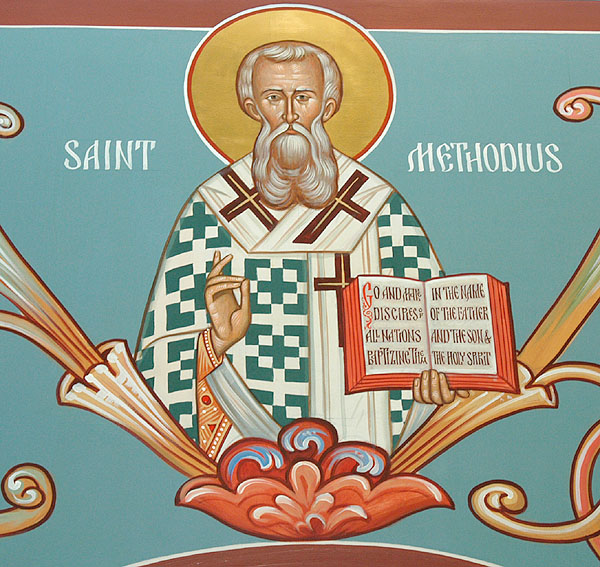 
Born:
8th century at Syracuse
Died:
847
Patriarch of Constantinople (842-846), defender of images during the second Iconoclast persecution, b. at Syracuse, towards the end of the eighth century; d. at Constantinople, 14 June, 846. The son of a rich family, he came, as a young man, to Constantinople intending to obtain a place at Court. But a monk persuaded him to change his mind and he entered a monastery. Under the Emperor Leo V (the Armenian, 813-820) the Iconoclast persecution broke out for the second time. The monks were nearly all staunch defenders of the images; Methodius stood by his order and distinguished himself by his opposition to the Government. In 815 the Patriarch Nicephorus I (806-815) was deposed and banished for his resistance to the Iconoclast laws; in his place Theodotus I (815-821) was intruded. In the same year Methodius went to Rome, apparently sent by the deposed patriarch, to report the matter to the pope (Paschal I, 817-824). He stayed in Rome till Leo V was murdered in 820 and succeeded by Michael II (820-829). Hoping for better things from the new emperor, Methodius then went back to Constantinople bearing a letter in which the pope tried to persuade Michael to change the policy of the Government and restore the Patriarch Nicephorus. But Michael only increased the fierceness of the persecution. As soon as Methodius had delivered his letter and exhorted the emperor to act according to it, he was severely scourged (with 70 stripes), taken to the island Antigoni in the Propontis, and there imprisoned in a disused tomb. The tomb must be conceived as a building of a certain size; Methodius lived seven years in it. In 828 Michael II, not long before his death, mitigated the persecution and proclaimed a general amnesty. Profiting by this, Methodius came out of his prison and returned to Constantinople almost worn out by his privations. His spirit was unbroken and he took up the defence of the holy images as zealously as before.
Michael II was succeeded by his son Theophilus (829-842), who caused the last and fiercest persecution of image-worshippers. Methodius again withstood the emperor to his face, was again scourged and imprisoned under the palace. But the same night he escaped, helped by his friends in the city, who hid him in their house and bound up his wounds. For this the Government confiscated their property. But seeing that Methodius was not to be overcome by punishment, the emperor tried to convince him by argument. The result of their discussion was that Methodius to some extent persuaded the emperor. At any rate towards the end of the reign the persecution was mitigated. Theophilus died in 842 and at once the whole situation was changed. His wife, Theodora, became regent for her son Michael III (the Drunkard, 842-867). She had always been an image-worshipper in secret; now that she had the power she at once began to restore images, set free the confessors in prison and bring back everything to the conditions of the Second Nicene Council (787). The Patriarch of Constantinople, John VII (832-842), was an Iconoclast set up by the Government. As he persisted in his heresy he was deposed and Methodius was made patriarch in his place (842-846). Methodius then helped the empress-regent in her restoration. He summoned a synod at Constantinople (842) that approved of John VII's deposition and his own succession. It had no new laws to make about images. The decrees of Nicæa II that had received the assent of the pope and the whole Church as those of an Œcumenical Council were put in force again. On 19 Feb., 842, the images were brought in solemn procession back to the churches. This was the first "Feast of Orthodoxy", kept again in memory of that event on the first Sunday of Lent every year throughout the Byzantine Church. Methodius then proceeded to depose Iconoclast bishops throughout his patriarchate, replacing them by image-worshippers. In doing so he seems to have acted severely. An opposition formed itself against him that nearly became an organized schism. The patriarch was accused of rape; but the woman in question admitted on examination that she had been bought by his enemies.
On 13 March, 842, Methodius brought the relics of his predecessor Nlicephorus (who had died in exile) with great honour to Constantinople. They were exposed for a time in the church of the Holy Wisdom, then buried in that of the Apostles. Methodius was succeeded by Ignatius, under whom the great schism of Photius broke out. Methodius is a saint to Catholics and Orthodox. He is named in the Roman Martyrology (14 June), on which day the Byzantine Church keeps his feast together with that of the Prophet Eliseus. He is acclaimed with the other patriarchs, defenders of images, in the service of the feast of Orthodoxy: "To Germanus, Tarasius, Nicephorus and Methodius, true high priests of God and defenders and teachers of Orthodoxy, R. Eternal memory (thrice)." The Uniate Syrians have his feast on the same day. The Orthodox have a curious legend, that his prayers and those of Theodora saved Theophilus out of hell. It is told in the Synaxarion for the feast of Orthodoxy.
St. Methodius is reputed to have written many works. Of these only a few sermons and letters are extant (in Migne, P.G., C, 1272-1325). An account of the martyrdom of Denis the Areopagite by him is in Migne, P.G., IV, 669-682, two sermons on St. Nicholas in N. C. Falconius, "S. Nicolai acta primigenia" (Naples, 1751), 39-74. For other fragments and scholia, see Krumbacher, "Byzantinische Litteratur" (Munich, 2nd ed., 1897), 167.