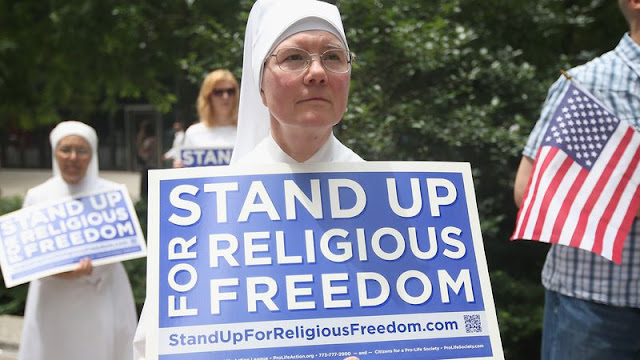 WASHINGTON— Archbishop Thomas G. Wenski of Miami, the acting chairman of the U.S. Conference of Catholic Bishops’ (USCCB) Committee for Religious Liberty has encouraged Catholics to pray and uphold religious liberty at home and abroad during Religious Freedom Week 2020. Commencing on June 22, the Feast of Sts. Thomas More and John Fisher, Religious Freedom Week runs through June 29, the Solemnity of Sts. Peter and Paul. The theme chosen for this year is “For the Good of All.”
Archbishop Wenski stated:
“Religious freedom is under stress throughout the world. Even in our Western liberal democracies, discrimination against religion in general and Catholic Christianity, in particular, is growing — albeit in perhaps more sophisticated and less violent ways.
“Political analysts and human rights advocates do include religion on their agenda. But most emphasize ‘tolerance’ as if religion were only a source of conflict. Or, they speak about religion in terms of ‘individual choices,’ as if religion were merely the concern of an individual’s conviction and were devoid of any social consequences.
“Yet, just as freedom of speech depends not only on one’s right to say what’s on one’s mind but also on the existence of institutions like newspapers, universities, libraries, political parties and other associations that make up what we call ‘civil society,’ so too freedom of religion ‘for the good of all’ must also encompass protecting those institutions that nourish the individual’s free exercise of religion.
“The right to religious freedom has its foundation in the very dignity of the human person. Religious freedom is the human right that guarantees all other rights — peace and creative living together will only be possible if freedom of religion is fully respected.”
Resources for Religious Freedom Week and other religious liberty resources may be found at www.usccb.org/ReligiousFreedomWeek and www.usccb.org/freedom. Social media posts will use the hashtag #ReligiousFreedomWeek.
FULL TEXT Source: USCCB
Here is the promotional video from last year:
Posted by Jesus Caritas Est at 9:35 PM