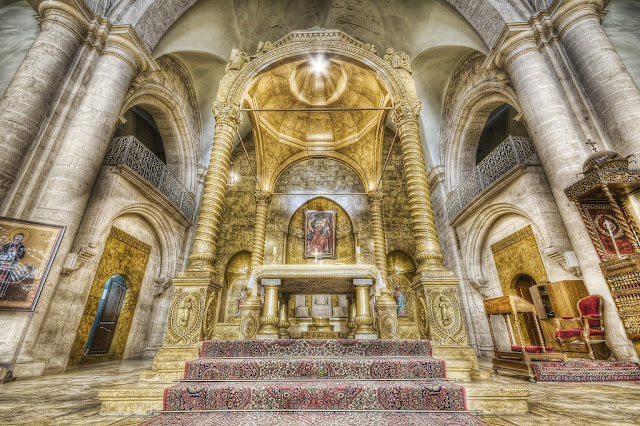 ACN: After long repair work, the Maronite Cathedral of St. Elijah in the Syrian city of Aleppo was officially re-opened on the 20th of July. During the Syrian Civil War, between 2012 and 2016, the cathedral suffered at least three extensive missile attacks and numerous less serious attacks. However, the worst damage happened in 2013 when the jihadist rebels broke through into this quarter of the city and attempted to destroy all signs of Christianity. After lying in ruins for four years, the cathedral was finally able to re-open it doors for Christmas 2016, despite its ruined state, after this part of the city had been liberated from rebel control earlier that year.

The international charity Aid to the Church in Need, one of the biggest contributors of funds for the repair of the cathedral, talks to Monsignor Joseph Tobji, Maronite Archbishop of Aleppo, about the profound meaning of the reopening of the cathedral. The interview was conducted by Maria Lozano.

ACN: During the Syrian war the cathedral suffered massive attacks. What was your feeling when you visited the cathedral for the first time after its destruction?

In 2012-2013, some shells fell on the church and I usually went to see the effects of each blow and witnessed them with sadness and pain. I would come back and tell the priests what had happened. Later the strikes intensified, and I could not reach the church. When Aleppo was liberated and I went to inspect the church and saw the severe damage to the ceiling, the dome and the walls, I said to myself: “As we all suffered as human beings, so did the house of God and the house of the congregation. This house (the church) played a role in receiving the blows themselves in order to protect the surrounding civilians.” I thanked the care of God who uses means that we may not understand for salvation. Nevertheless, when I saw the state of the church there were questions that had been going on in my mind since the beginning of the war: why this evil, this injustice, this humiliation, this ignorance…

Monsignor Joseph Tobji, Maronite Archbishop of Aleppo.
ACN: After being abandoned for four years, the church was reopened before Christmas 2016. What was your message to the Christians on that day?

In 2016, twelve days after the liberation of Aleppo, we decided to celebrate Christmas in the cathedral in its bad condition at the time. We decided to send a message of hope that the Son of God was incarnate and He is still with us, accompanying us in our sorrows and pains, and carrying them with us, so that they transform into a life of hope, faith, love and thus a life of holiness. The moment during the Mass when the child Jesus was placed in the manger made of the ruins of the collapsed roof was very touching, as I, with the people attending the service, were crying and laughing at the same time, and everyone was clapping and cheering with joy.

ACN: What does official re-opening of the cathedral on 20 July mean for you?

The restoration and reopening of the cathedral has both a symbolic and a practical meaning. In the symbolic sense it is a message to the parishioners and Christians in Aleppo and the world that we are still in this country despite our dwindling numbers, and the restoration of the cathedral is proof of this. The mouths must continue to praise God in this place despite all the difficulties. Our desire to stay is a “Mission” and not just because we were born here, or because we are obliged to stay here against our will. In practical terms: we, Maronites, have no place to bring us together other than this cathedral, and the decision to restore it was self-evident, just like a family who wanted to renovate our only house that brought us together.

ACN: What was the biggest difficulty during the reconstruction?

The main difficulties in the reconstruction of the cathedral were obtaining funding, which was facilitated and supported by Aid to the Church in Need. The rebuilding of the cathedral’s wooden roof, exactly as the original, was also a challenge. We lack local expertise in this field, so we asked Italian architects to design the wooden roof project, and we had to bring wood from Italy and also an expert to install the roof. Here again, we suffered from a shortage of equipment and materials, so engineers and workers had to rely on rudimentary methods and manpower to carry out the project.

ACN: What would you like to say to ACN’s benefactors who made the reconstruction possible?

On behalf of all the parishioners and myself, we wholeheartedly thank Aid to the Church in Need, and all the donors who have contributed with faith and generosity to this dream. Without the help of ACN and the generosity of the benefactors, we would not have been able to pray again and spread hope in the hearts of the faithful through the reconstruction of the cathedral. Please rest assured that we pray daily for you and ask God to shower his blessings on you and your families. We wish that conditions could be better so that you could share with us our joy at the opening of the cathedral, yet we feel your spiritual accompaniment, and we will certainly hold another “Thank You” ceremony with you when the circumstances arise.
Full Text edited from AID TO THE CHURCH in NEED Release