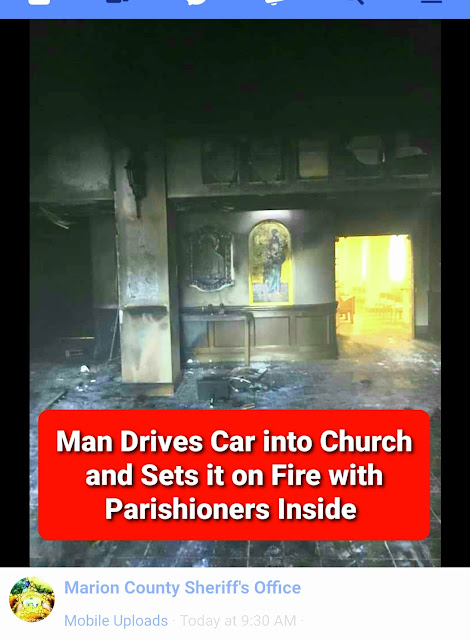 A man drove a minivan into church, and sets it on fire with people inside according to police.

Photo: Marion County Sheriff's Office
In Marion  County, Florida a driver crashed into a Florida church and then set it on fire as parishioners prepared for mass Saturday, but no one was hurt, authorities said.
Deputies have taken into custody 24-year-old Steven Anthony Shields after he allegedly crashed a minivan through the front doors of Queen of Peace Catholic Church in Ocala at about 7:30 a.m. on Saturday July 11, 2020.

The man  allegedly got out and threw some kind of incendiary device, causing a fire that resulted in extensive damage to the building.


The Diocese of Orlando released a statement Saturday following the incident:

“We praise God that no one was injured. We join in prayer for Father O’Doherty, the parishioners of Queen of Peace Catholic Church, our first responders and the gentleman who caused this damage. May we come to know the Peace of the Lord.Masses will resume as normal in the parish hall beginning this evening.”
The Diocese of Orlando
.

**UPDATE** Marion County Sheriff’s Office (MCSO) deputies responded to Queen of Peace Catholic Church, located at 6455 SW State Road 200, after receiving reports of someone setting fire to the sanctuary while several parishioners were inside preparing for a morning mass. Arriving deputies learned that the defendant, Steven Anthony Shields (DOB 1/7/1996), had intentionally crashed a vehicle through the front doors of the church, exited the vehicle and poured gasoline out into the foyer area and then lit it on fire. He then left in the vehicle.
The parishioners were able to escape without injury and Marion County Fire Rescue personnel were able to quickly extinguish the fire.
Shields has been charged with several charges including one count of Attempted Second Degree Murder.
Sheriff Billy Woods said, “Our freedom of worship granted in the Constitution is a freedom that we all hold dear. My deputies and I are sworn to protect that right and will always ensure our citizens can worship in peace. I’m proud of my deputies for capturing this man so quickly and we appreciate the assistance from all of the state and federal agencies that worked alongside of us during this investigation.”     
Posted by Jesus Caritas Est at 9:50 PM