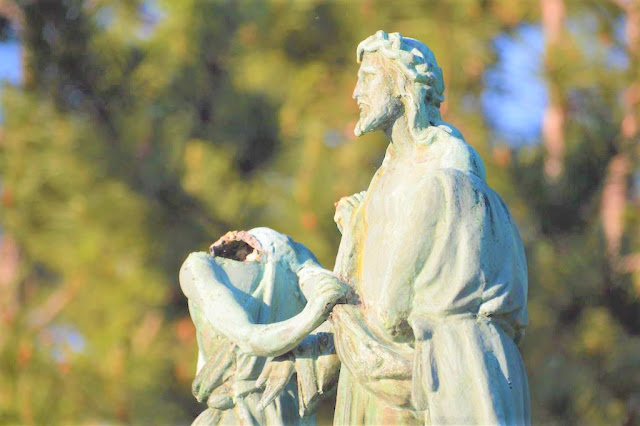 The Sudbury Star reports that several religious statues in a Lourdes Grotto were decapitated in Sudbury, Ontario, Canada.

Police are still looking for the culprit(s) responsible for damaging the Stations of the Cross located in the Grotto of Our Lady of Lourdes site off Van Horne Street. Heads and arms were removed from several statues.
Caretakers of a cherished religious site near downtown are looking into ways to restore a half-dozen statues that had heads and appendages lopped off in late May by an unknown vandal.

David Sirois, assistant financial administrator with the Roman Catholic Diocese of Sault Ste. Marie, said whoever carried out the act of destruction — and desecration — at the Grotto of Our Lady of Lourdes off Van Horne Street seems to have used a saw, as the heads were cut off cleanly and one figure was partially sawn through closer to the base.

The statues are part of a Stations of the Cross installment telling the story of Christ’s final day in 14 stages, beginning with his condemnation and culminating in crucifixion.

Police are still looking for the culprit(s) responsible for damaging the Stations of the Cross located in the Grotto of Our Lady of Lourdes site off Van Horne Street. Heads and arms were removed from several statues.

The destruction shockingly happened in the middle of the day — “between 1 p.m. and 6 p.m, from what we can determine,” said Sirois — and mostly involved the removal of heads from the figures on the statues.

Replacing those parts, which were cast from bronze, won’t be a simple matter.

The statues were created in the early 1950s and ever since have anchored the Grotto site, which has expanded and improved around them.

Sirois said the crime occurred May 22 and was reported to police at the time, but wasn’t made public immediately as investigators wanted to first explore leads.


Should a suspect be identified, Staff-Sgt. Sherry Young of Greater Sudbury Police said they would be charged with mischief, and restitution would also be requested.

Sirois said the diocese has insurance on the site but it is not clear yet whether or not the full cost of the repairs will be covered. If necessary, the Catholic organization may consider fundraising to meet the balance, he said.

Either way, the diocese is determined to restore the damaged sculptures.


It’s not the first time a religious statue has been vandalized in Sudbury.

About four years ago the head of the baby Jesus on a sculpture of the Virgin Mary outside Ste. Anne des Pins church on Beech Street was stolen and temporarily replaced with a clay facsimile — before the original was magically returned.

Edited from www.thesudburystar.com/
Posted by Jesus Caritas Est at 4:47 PM