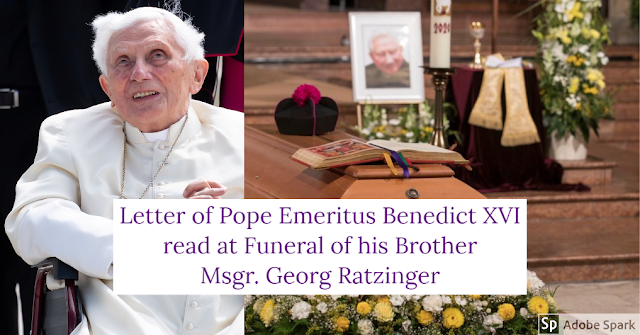 Retired Pope Emeritus Benedict XVI followed the funeral of his brother, Georg Ratzinger, via livestreaming, according to CNS. The main celebrant at the funeral was Bishop Rudolf Voderholzer of Regensburg who said Pope Benedict, 93, was connected to the Mass taking place for his older brother July 8 in the Regensburg Cathedral. Msgr. Georg Ratzinger died on July 1, 2020 at the age of 96. From June 18-22 Pope Benedict made a surprise to the sickbed of his dying brother. The Bishop explained, "This sign of humanity touched many people. So all the more do we share in your mourning," he said in words addressed to the retired pope. Pope Benedict's private secretary, Archbishop Georg Ganswein, and the pope's ambassador to Germany, Archbishop Nikola Eterovic were participants; also attending was the former Regensburg bishop, Cardinal Gerhard Muller, and Munich Cardinal Reinhard Marx. Providing musical accompaniment for the funeral Mass were 16 former members of the "Domspatzen," the name of the Regensburg Cathedral's world-famous boys' choir that Msgr. Ratzinger directed from 1964 to 1994. The retired pope had written to his deceased brother a letter, which was read out loud at the ceremony by Archbishop Ganswein. (Above report edited from CNS)

His Excellency
the Most Reverend
Dr. Rudolf VODERHOLZER

I am with you at this hour in which you are celebrating my brother's last brotherly service, giving him escort on the last earthly path. I feel compelled to say a word of thanks for everything you have done and are doing in these weeks of farewell. My thanks also go to all those who have been with him in these weeks and who have shown him their gratitude for what he has done and suffered for them in his life.

The echo of his life and work that I received in the form of letters, telegrams and e-mails these days goes far beyond what I could have imagined. People from many countries, from all classes and professions wrote to me in a way that touched my heart. Every individual should have a personal answer. Unfortunately, I lack the time and strength to do this, and I can only thank everyone for taking part in these hours and days. Cardinal Newman's sentence has come true for me right now: “Cor ad cor loquitur.” Throughout the paper and beyond all paper, heart speaks to heart.


I would like to mention another characteristic of my brother. On the one hand there is his cheerful sociability, his humor, his joy in the good gifts of creation. At the same time, however, he was a man of direct expression in that he expressed his conviction openly. He lived in the greatest possible blindness for over twenty years and was therefore excluded from a good part of reality. This great sacrifice was always difficult for him. But he has always accepted and passed it from within.


But in the last he was a man of God. Even if he did not show his piety, it was the real center of his life over all sobriety and honesty.


Finally, I would like to thank you for being with him again in the last days of his life. He didn't ask for a visit from me. But I felt that it was the hour to go back to him. I am deeply grateful for this inner sign that the Lord has given me. When I said goodbye to him in the morning on Monday, June 22nd, we knew it would be a farewell to this world forever. But we also knew that the benevolent God who gave us this togetherness in this world will also rule in the other world and will give us a new togetherness there. Thank God, dear Georg, for everything you have done, suffered and given to me!


And God bless you again, dear Bishop Rudolf, for the very extraordinary effort you made in these weeks, which were not easy for both of us.