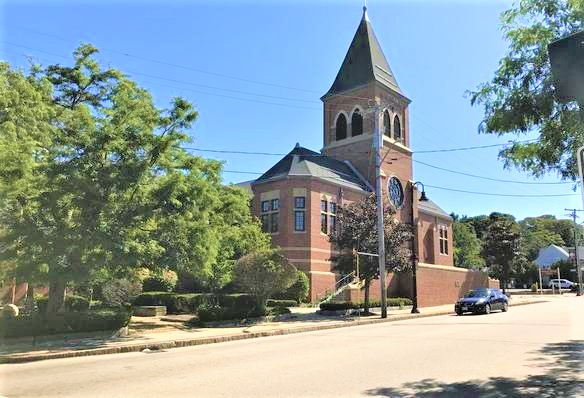 Police are investigating possible arson to the Sacred Heart Church on Washington Street in Weymouth, Massachusetts.  Just after 9 a.m. on Monday, August 3, 2020 police officers responded to a call from Sacred Heart Church. Police found fire damage to the entrance to the church, according to Weymouth Police Capt. Joseph Comperchio. Police said the incident, believed to be arson, likely occurred sometime between 11 p.m. Sunday and 8 a.m. Monday.
Anyone with information about this fire is asked to call the Arson Hotline at 1-800-682-9229. All calls are confidential. The hotline is part of the Arson Watch Reward Program that provides rewards of up to $5,000 for information that helps to solve the case.
The incident is currently under investigation by the Weymouth police and fire departments and the state Fire Marshal’s Office. The Catholic Action League of Massachusetts said in a statement that a parishioner reported that the remnants of a Molotov cocktail - a bottle filled with flammable liquid - was found. Sacred Heart Church, dating back to 1882, was restored after a devastating seven-alarm fire in 2005. The Catholic Action League called the incident “a vicious crime and an appalling act of violence targeting a faith community which is still recovering from the trauma and loss of a previous fire.”
Edited from patriotledger.com
(Some pictures on Social Media show the church's 2005 Fire which caused great damage - this fire, however caused minimal damage)