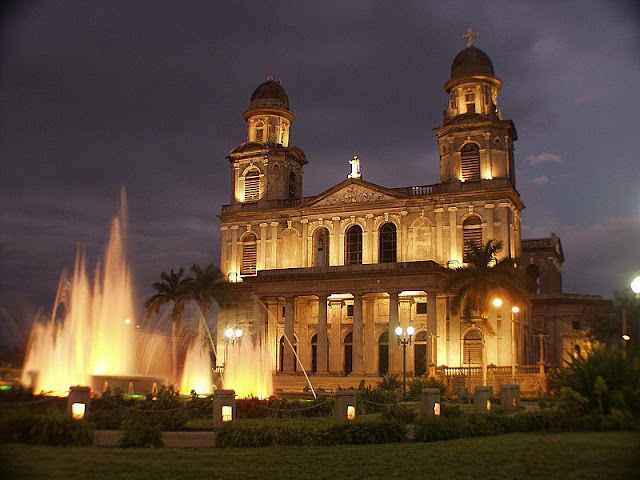 A terrorist threw a bomb and set fire to an image of the Blood of Christ that has been in Nicaragua for 382 years and that was venerated by Saint John Paul II in 1996, when he knelt and prayed at his feet, during his second visit to the country, which is mainly Catholic. (image from the Twitter of the Archbishop)

The image of the Blood of Christ, whose chapel is located on the west side of the Cathedral, was completely charred
The Catholic Church described the action as "a totally condemnable act of sacrilege and desecration, for which we must remain in constant prayer, to defeat the evil forces"
"An unidentified person entered the Chapel of the Blood of Christ in the Metropolitan Cathedral of Managua, and dropped a bomb, causing a fire inside the chapel, where the consecrated and venerated image of the Blood of Christ remains and exposed the Most Holy in his tabernacle, ”the Archdiocese of Managua reported in a statement .

The image of the Blood of Christ, whose chapel is located on the west side of the Cathedral, was completely charred , but its structure supported it standing, as it could be seen after the firefighters put down the fire, which occurred before noon this Friday.

The Catholic Church described the action as "a totally condemnable act of sacrilege and desecration, so we must remain in constant prayer, to defeat the evil forces . "

Just yesterday, Cardinal Leopoldo Brenes reiterated to priests and believers to be vigilant and vigilant in the care of their chapels, after the desecration that occurred against two parishes in the Archdiocese of Managua.

These desecrations have occurred after the Archdiocese of Managua announced the suspension of the popular festivities in honor of Saint Dominic  de Guzmán , the largest in Nicaragua, to avoid crowds, due to the COVID-19 pandemic, between 1 and next August 10.


"What happened has been a painful wound to the heart of the Nicaraguan Catholic people," said the influential auxiliary bishop of the Archdiocese of Managua, Silvio Báez , exiled since 2019 after receiving death threats, allegedly from groups linked to the government of President Daniel Ortega.

The Superior Council of Private Enterprise (Cosep) affirmed that the attack joins other "acts of vandalism that in recent days have been carried out against Catholic churches in other cities of the country, which represent a serious persecution against the Catholic Church, its leaders. and the parishioners, attacking the religious freedom established by our Constitution. "

Relations between the Catholic Church and Ortega have been strained in Nicaragua since 2018, when the majority of priests risked their lives to save the lives of thousands of people who participated in anti-government demonstrations and which were controlled with armed attacks that left hundreds of dead, prisoners. and disappeared.

Ortega has argued that the priests supported the United States in an alleged "failed coup" two years ago. Such declarations have provoked physical attacks against some of the bishops and systematic desecration towards Catholic churches, carried out by Sandinista fanatics who have vindicated them or by unknown persons.

The Archbishop of Managua, Leopoldo Brenes , described as a "terrorist act" the fire declared this Friday in a chapel of the Metropolitan Cathedral of the Nicaraguan capital, which burned a historical image of the Blood of Christ, in the country with a Catholic majority.

"This is what I want to say, clearly, it is a terrorist act to intimidate the Church in its evangelizing mission , " said Brenes, who in July 2018 denounced that the Catholic Church is persecuted by the government of President Daniel Ortega.

At an impromptu press conference in the cathedral courtyard, the Nicaraguan cardinal stated that there are indications that the burning of one of the most precious assets of Nicaraguan Catholics "was very calmly planned . "

Brenes connected the fire with another event that occurred last July 20, in which a man in a van destroyed the gates of the cathedral, and with the theft of a fence, which served as an escape route for the cause of the fire.

"He figured everything out, where to get in, how to do it, and then where to escape. This was truly planned," he said.
Edited from Religion Digital