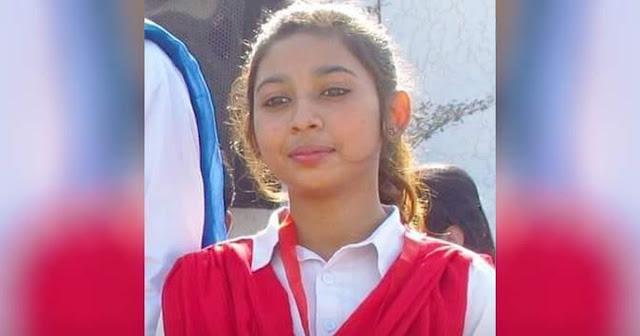 Verdict in Pakistan Portends More Forced Marriages/Conversions of Christian Girls
Court returns 14-year-old Catholic girl to Muslim who allegedly abducted her.
August 14, 2020 By Our Pakistan Correspondent -
LAHORE, Pakistan (Morning Star News) – A court decision in Pakistan to return custody of a 14-year-old Christian girl to the Muslim who allegedly kidnapped her and forced her to convert to Islam and marry him will make more Christian girls vulnerable to such trauma, sources said.

Lala Robin Daniel, a rights activist based in Faisalabad assisting the family of Maira Shahbaz, said the Lahore High Court’s refusal to take into account the documented age of the girl and the falsification of documents, including a fake marriage certificate, was unprecedented and would lead to more such cases.

“If the courts of this country start validating underage marriages of girls belonging to the minority communities, it will encourage people from the majority faith to target them with even more impunity,” he said. “A minor child can easily be influenced or coerced into renouncing their faith and marrying someone. This practice needs to be stopped.”

Daniel and the family’s attorney correctly refer to the girl as Maira in court documents, but the court mistakenly called her Maria in its verdict. A Catholic from Medina Town, Faisalabad, Maira contracted false marriage with the already married Muslim, Nakash Tariq, on Oct. 25, 2019 – six months before he allegedly abducted her on April 28, according to her mother, Nighat Shahbaz, a single parent and domestic worker.

According to court documents, Nighat Shahbaz said she and her family were unaware of the fake marriage until after Maira was allegedly kidnapped and appeared in Faisalabad Sessions Court on July 23. At that hearing, Maira told Judge Rana Masood Akhtar that she was over 18 years old, had converted to Islam of her free will and wanted to live with her Muslim husband.

Since the family had challenged the underage marriage, the judge sent Maira to a women’s shelter on July 28 until her age could be determined, as the 2019 Child Marriage Restraint (Amendment) Act bars marriage of a child under the age of 18.

Khalil Tahir Sindhu, lawyer for Nighat Shahbaz and a member of the Punjab Assembly, told Morning Star News that the Lahore High Court (LHC) presided by Justice Shahid Mahmood Abbasi allowed Maira to go with Tariq without considering evidence that the girl was underage and that the marriage certificate was fake.

The cleric whose name is listed on the marriage certificate denied involvement in the sham marriage, and the document failed to show proof of consent from Tariq’s first wife, with whom he has two children, Sindhu added.

“In my arguments before the learned high court, I submitted evidence that according to NADRA [National Database and Registration Authority], Maira’s date of birth is Oct. 30, 2005, and the same is recorded in her school leaving certificate,” the attorney said.

He also argued that the investigating officer of the case, Assistant Sub-Inspector Shahid Wahla, had made no effort to verify the documentary evidence under Section 8 of the Juvenile Justice System Act 2008, which requires determination of age based on birth certificate, educational certificates, and in absence of any such documents, a physical examination by a doctor, Sindhu said.

“When we objected to the inefficient and shoddy investigation by ASI Wahla, the probe was entrusted to Deputy Superintendent of Police Rana Ataur Rehman by the Faisalabad District Standing Board, which oversees complaints against the police,” the lawyer said.

Sindhu added that cleric Muhammad Abu Bakar, under whose name and seal the fake Nikah Nama (Islamic marriage certificate) had been produced in court, had also filed a case against Tariq for presenting a fictitious document.

“It is appalling that the honorable judge ignored these key facts while writing the verdict, even though presenting fake documents in court is a criminal offense and punishable under the law,” Sindhu said, adding that his team will file an intra-court appeal against the single bench’s order and also approach the Supreme Court if it is not accepted.

Sindhu said it was likely that Maira stated she married and converted of her own will due to fear or coercion, as her family has had no contact with her since she was allegedly kidnapped.

“It’s not very difficult to threaten a minor to say what you want them to say,” he said.

The high court’s verdict states that Maira’s family was denied custody because “she stated that she’s 18 years old, recited the Kalma Tayyaba to prove she had embraced Islam without any duress, and married Nakash Tariq by choice.”

“The statement of Maria [sic] Shahbaz as well as her general appearance unambiguously show that she is a grown-up young lady who seems to have attained the age of puberty and who acknowledges Nakash Tariq as her lawfully wedded husband,” the verdict states.

The verdict acknowledges that the judge dismissed evidence her family’s attorney provided that the minor could not have contracted marriage without the consent of her guardian and that the marriage certificate was fake.

“As far as proof of marriage is concerned, the other formalities can be ignored and simple acknowledgement of husband and wife regarding their Nikah [marriage] is sufficient to prove the same,” the verdict states. “In such circumstances, the mandatory requirement of presence of two witnesses can be ignored.”

Regarding authenticity of the marriage certificate, the verdict states, “Only the family court would be in a better position to resolve the controversy between the parties regarding genuineness or otherwise of ‘Nikah Nama.’”

In February the forced conversion to Islam and marriage of another 14-year-old Christian girl was validated in a court ruling in Pakistan. The High Court in Sindh Province on Feb. 3 dismissed a petition to have the marriage and forced conversion of Huma Younus overturned, ruling that both were valid since a girl under sharia (Islamic law) can marry after her first menstrual cycle.

The Catholic girl was taken from her home in Karachi’s Zia Colony on Oct. 10, 2019 while her parents were away and was forced to marry the man who abducted her.

“Islamic law says that if a girl has attained puberty she shall be treated as a major, and a full bench of the LHC has already declared that a major Muslim girl needs no consent of the Wali or guardian for a valid marriage,” Malook said. “This judgment of the LHC was endorsed by the Supreme Court in a case reported in 2004.”

Malook said that the verdict in Maira’s case follows precedents established by the LHC and Supreme Court, particularly when a girl has repeatedly told courts that she is the legally wedded wife of the accused and desires to lives with her husband.

Malook, a Muslim who represented Aasiya Noreen (better known as Asia Bibi), in Pakistan’s most high-profile blasphemy case and won her freedom, said that forced conversion contradicts the Koran.

“It is clearly stated in the Koran that no person can be forced to renounce their faith and embrace Islam,” he said. “In Maira’s case, the girl has repeatedly proclaimed that she has converted to Islam without duress, hence prima facie it cannot be said that it is a case of forced conversion unless the girl retracts her statements given in court.”

Pakistan ranked fifth on Christian support organization Open Doors 2020 World Watch list of the 50 countries where it is most difficult to be a Christian, and on Nov. 28, 2018, the United States added Pakistan to its blacklist of countries that violate religious freedom.
FULL TEXT Source:  https://morningstarnews.org/2020/08/verdict-in-pakistan-portends-more-forced-marriages-conversions-of-christian-girls/
Posted by Jesus Caritas Est at 2:20 PM