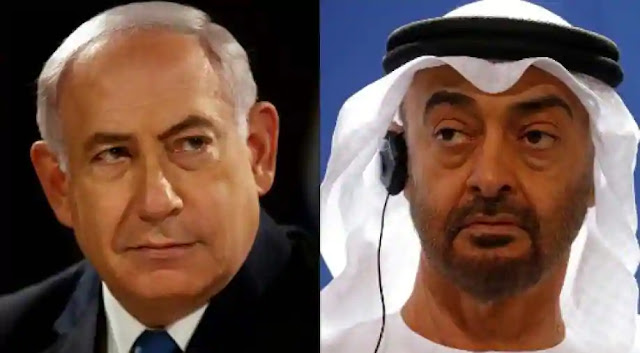 Asia News report: by Joshua Lapide
The Emirates are the third Arab country, after Egypt and Jordan, to establish diplomatic relations with Israel. The agreement should "advance peace in the Middle East". For Abu Dhabi, it will stop Israeli annexation of the occupied territories; for Tel Aviv the annexations will be partial and only "postponed". For Hamas, the agreement is a betrayal of the Palestinian cause. Bahrain and Oman could follow Abu Dhabi's example. But the axis of the Resistance, led by Iran, would be strengthened.

Jerusalem (AsiaNews) - A joint press release and the public announcement by US President Donald Trump yesterday broke the news that Israel and the United Arab Emirates have decided to normalize their diplomatic relations.

This step - it is said - "will advance peace in the Middle East" and is testimony to the "audacious vision of the three leaders": Donald Trump, Benjamin Netanyahu, Mohammed Bin Zayed.

In the coming weeks, the delegations of the two Middle Eastern countries will meet to draw up bilateral agreements in investments, security, telecommunications, technology and culture.

The deal had been in the air for some time, prepared by sports matches and television series, but the catalyst was the Trump administration's haste to show the effectiveness of its Middle East peace plan, in anticipation of the presidential elections in the United States. USA.

The Palestinian question was holding back the pace. In 2002, the countries of the Arab League, led by Saudi Arabia, proposed to Israel the normalization of relations in exchange for the withdrawal of Tel Aviv from the occupied territories, the total reception of Palestinian refugees and the launch of a Palestinian state. Israel had rejected it. With yesterday’s agreement, the unity between Arab countries has broken and the future of a Palestinian state is at risk.

Mohammed bin Zayed stressed yesterday that this step will stop the annexation of territories occupied by Israel, but Netanyahu said that the annexations will only be stopped "temporarily" and that at most there will be no annexation of parts of the West Bank.

Upon hearing the news, Palestinian Authority President Mahmoud Abbas called an emergency meeting; Hamas has called Abu Dhabi a "traitor" of the Palestinian cause.

The Emirates are the third Arab country to establish diplomatic relations with Israel. In 1979 Egypt did so; in 1994 Jordan. Cairo hailed the new agreement as "a step" towards "the realization of peace in the Middle East". Amman has not been enthusiastic, pointing out that everything will depend on the future steps of Israel, which continues to violate the "rights of the Palestinians" and should engage in a dialogue for a two-state solution.

In the near future, the Israel-Emirates agreement could push other Arab countries to take similar steps, especially Bahrain and Oman. But it could also strengthen the so-called "Axis of Resistance", which sees Iran as the state that does not bow to Israel and defends the Palestinians, with Qatar and Turkey aligned.