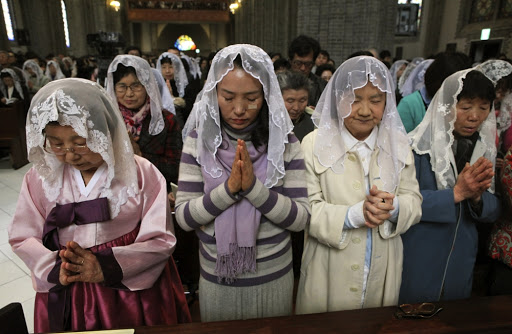 The Diocese of Pyongyang, North Korea, is to be dedicated to Our Lady of Fatima on 15 August, the Solemnity of the Assumption of the Blessed Virgin Mary.

The Archbishop of Seoul and Apostolic Administrator of Pyongyang, Cardinal Andrew Soo-jung Yeom, made this announcement in his message for the liturgical Solemnity. He said that the assumption into heaven of Our Lady “is a sign of hope for us, the faithful, because it has given us hope that if we are faithful in our believing like the Holy Mother, we will be saved and rewarded with eternal life in the kingdom of God (Luke 1:38).”

And, “since this year marks the 75th anniversary of the liberation of Korea from the Japanese colonial rule and the 70thanniversary of the outbreak of the Korean War,” he decided to “dedicate the Pyongyang Diocese to Our Lady of Fatima after sincere prayer and discernment.”

He also expressed his wish that “the day will come soon when we will be able to share with our North Korean brothers and sisters the joy of the Assumption of the Blessed Virgin Mary.”

The dedication ceremony will hold during the Mass on 15 August at Myeongdong Cathedral in the South Korean city of Seoul.

Celebration amid history of challenges
Cardinal Yeom said that the liturgical Solemnity is special and meaningful for the Korean Church because on 15 August 1945, Korea was liberated from Japanese colonial rule.

However, “amid the whirlwinds of the nation’s division following the liberation and the subsequent Korean War, all Koreans suffered unspeakable pain.”

He went on to explain that religious people suffered even more. Churches and monasteries were closed during the war, and priests, religious and the faithful were taken into custody and subjected to hardship or death. He also gave the example of “Servant of God” Bishop Francis Borgia Hong Yong-ho and his 80 companions “who professed their faith to the end,” becoming “martyrs of the persecution carried out by the Stalinist regime of Kim Il-Sung.”

In 1949, Bishop Yong-ho and a group of priests and laypeople were taken into custody and disappeared. The Korean Church has opened the process of the beatification of Bishop Yong-ho.

Even now, Cardinal Yeom lamented, “there is not a single clergyman in North Korea who can perform his ministry,” adding that “we need the special grace of God to correct this sad reality.”

The dedication, therefore, comes as this year marks the double events of the 75th anniversary of Korea’s liberation from colonial rule and the 70th anniversary of the outbreak of the Korean War, said Cardinal Yeom. He also expressed his desire that one day the Church in the two Koreas would be able to share the joy of the liturgical solemnity together.

Dedication ceremony
Cardinal Yeom pointed out that this is the first time the Pyongyang Diocese would be dedicated since its establishment in 1927.

Even though the dedication ceremony is in the Myeongdong Cathedral in Seoul, “it is significant given the spiritual unity between the Pyongyang Diocese and the Seoul Archdiocese.”

The Cardinal also mentioned that he asked Pope Francis for a special blessing for the Pyongyang Diocese, adding that the Pope “promised to offer a special prayer for the protection of the Blessed Virgin Mary” on the day of the dedication.

Call to peace
Cardinal Yeom said the Korean Catholic Church has been actively engaged in various humanitarian activities to promote true peace in the Korean Peninsula. However, relations between the two Koreas still remain strained.

The Covid-19 pandemic, he added, has further exacerbated the “ideological division, prevalence of life-threatening trends, and polarization of wealth” which only serve to deepen the conflicts between generations and between classes.

“We have been called by the Lord to serve as “apostles of peace” through prayer, repentance, sacrifice, and service,” he said. “Let us establish true peace on this land by overcoming the anxiety and distrust that have permeated every aspect of our society through the practice of love that Jesus Christ our Lord taught us.”

“I believe the urgent task of our time is to restore the spirit of community through which everyone can peacefully join in union and coexist,” he continued, adding that this can only be achieved when all are convinced that all humans are created in God’s image.

The Cardinal called for “dialogue based on mutual trust, not force” and expressed his desire that “the two Koreas will open their hearts and start to talk for real peace.” He also invited everyone to pray for the intercession of our Mother Mary, Mother of peace “to bring true peace in our society.”

“I hope the day will come soon when the North Korean Church will be able to praise the Lord again in joy and peace through the protection and intercession of the Holy Mother,” he added.

In conclusion, Cardinal Yeom prayed that, in celebrating the feast of the Assumption of Our Lady, her love will be given as a gift. He also prayed for a “new world overflowing with love and peace” and that God’s grace will be with all those suffering due to Covid-19.
FULL TEXT Source Vatican News.va
Posted by Jesus Caritas Est at 9:43 AM