Pope Francis says "..let us make sure that the cross hanging on the wall of the house, or ...around our necks, The cross is a holy sign of God's love.." 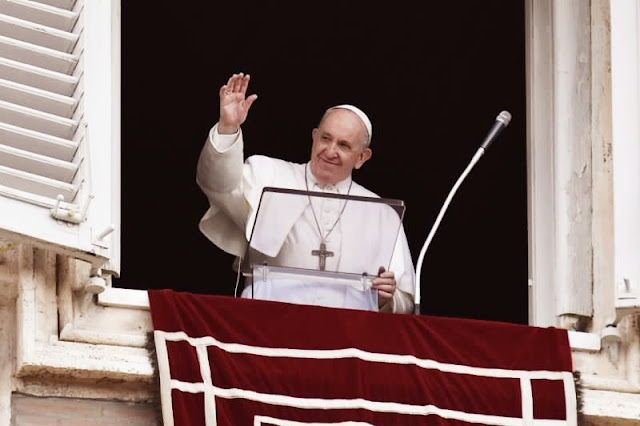 Dear brothers and sisters, good morning!
Today's Gospel passage (cf. Mt 16 : 21-27) is linked to that of last Sunday (cf. Mt 16 : 13-20). After Peter, also in the name of the other disciples, professed faith in Jesus as Messiah and Son of God, Jesus himself begins to speak to them about his passion. On the way to Jerusalem, he openly explains to his friends what awaits him at the end in the holy city: he foretells his mystery of death and resurrection, humiliation and glory. He says that he will have to "suffer a great deal from the elders, the chief priests and the scribes, and be killed and rise again on the third day" ( Mt 16:21). But his words are not understood, because the disciples have a faith that is still immature and too tied to the mentality of this world (cf.Rom 12.2). They think of a victory that is too earthly, and for this reason they do not understand the language of the cross.


Faced with the prospect that Jesus could fail and die on the cross, Peter himself rebels and says to him: «God forbid, Lord; this will never happen to you! " (v. 22). He believes in Jesus - Peter is like that - he has faith, he believes in Jesus, he believes; he wants to follow him, but does not accept that his glory passes through passion. For Peter and the other disciples - but also for us! - the cross is an uncomfortable thing, the cross is a "scandal", while Jesus considers fleeing from the cross "scandal", which would mean withdrawing from the will of the Father, from the mission that He has entrusted to him for our salvation. For this reason Jesus replies to Peter: «Get behind me, Satan! You are a scandal to me, because you do not think according to God, but according to men! " (v. 23). Ten minutes earlier, Jesus praised Peter, promised him to be the foundation of his Church, the foundation; ten minutes later he says "Satan". How come this is understood? It happens to all of us! In moments of devotion, fervor, good will, closeness to our neighbor, let us look at Jesus and go forward; but in the moments when the cross comes, we flee. The devil, Satan - as Jesus says to Peter - tempts us. It is proper to the bad spirit, it is proper to the devil to distance ourselves from the cross, from the cross of Jesus.
Then addressing everyone, Jesus adds: "If anyone wants to follow me, let him deny himself, take up his cross and follow me" (v. 24). In this way He points the way of the true disciple, showing two attitudes. The first is "renouncing oneself", which does not mean a superficial change, but a conversion, a reversal of mentality and values. The other attitude is to take up one's cross. It is not just a question of bearing the daily tribulations with patience, but of bearing with faith and responsibility that part of the effort, that part of suffering that the struggle against evil entails. The life of Christians is always a struggle. The Bible says that the believer's life is a militia: to fight against the bad spirit, to fight against Evil.
Thus the commitment to "take up the cross" becomes participation with Christ in the salvation of the world. Thinking about this, let us make sure that the cross hanging on the wall of the house, or the small one we carry around our necks, is a sign of our desire to join Christ in lovingly serving our brothers, especially the smallest and most fragile. The cross is a holy sign of God's love, it is a sign of the Sacrifice of Jesus, and should not be reduced to a superstitious object or an ornamental jewel. Every time we fix our gaze on the image of Christ crucified, we think that he, as a true Servant of the Lord, fulfilled his mission by giving his life, shedding his blood for the remission of sins. And let us not allow ourselves to be led to the other side, into the temptation of the Evil One. Consequently, if we want to be his disciples, we are called to imitate him,
May the Virgin Mary, united with her Son to Calvary, help us not to retreat in the face of the trials and sufferings that the witness of the Gospel entails for all of us.
After the Angelus
Dear brothers and sisters ,
the day after tomorrow, September 1st, is the World Day of Prayer for the Care of Creation. From this date, until 4 October, we will celebrate the "Jubilee of the Earth" with our Christian brothers of various Churches and traditions, to commemorate the institution, 50 years ago, of Earth Day. I greet the various initiatives promoted all over the world and, among these, the Concert which is taking place today in the cathedral of Port-Louis, capital of Mauritius, where unfortunately an environmental disaster has recently occurred.
I am following with concern the tensions in the eastern Mediterranean area, undermined by various outbreaks of instability. Please, I appeal to constructive dialogue and respect for international law to resolve the conflicts that threaten the peace of the peoples of that region.
And I greet all of you gathered here today from Rome, Italy and various countries. I see the flags there, and I greet the Religious Community of East Timor in Italy. Well done, with flags! The pilgrims of Londrina and Formosa, in Brazil; and the young people of Grantorto, diocese of Vicenza. Welcome! I also see Polish flags, I greet the Poles; Argentine flags, even the Argentines. Welcome everyone!

I wish everyone a happy Sunday. Please don't forget to pray for me. Have a good lunch and goodbye!