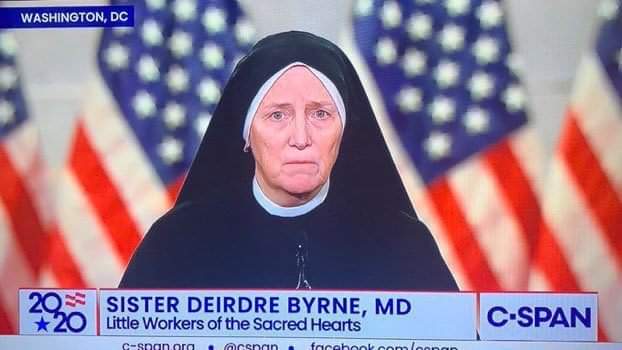 At the US Republican Congress on Wednesday, August 26, 2020 a Catholic religious Sister named Deidre Byrne gave a speech. Sister Dede Byrne is a member of from the Little Workers of the Sacred Hearts of Jesus and Mary.

Before joining the Order in 2002, Dede Byrne was in the US Army and served as a doctor in Afghanistan and the Sinai, among others. After 29 years of military service, she entered the order and from then on worked for the poor and sick of the world in Haiti, Sudan, Kenya and Iraq. "Donald Trump is the most resolute pro-life president we've ever had. President Trump will run against Biden-Harris, who is the most resolute anti-life ticket of all time, even promoting the horror of late abortion and infanticide." , "The truth is that the largest marginalized group in the world is within the US itself: these are the unborn."
. "As Christians we meet Jesus first as a touching child in the womb and nine months later as a newborn in the poverty of a cave." According to the sister, Jesus was not "politically correct". "As followers of Christ we are called to stand up for life and against what is politically correct."

Laws that destroy life in the womb must be combated. "As a doctor, I can say without hesitation: Life begins with fertilization. But I'm not just pro-life, I'm pro-eternal-life (for eternal life). I want us all to end in heaven at some point . " In the end, Sister Dede Byrne once again praised US President Donald Trump: "You will find us here with our weapon of choice, the rosary. Thank you Mr. President, we are all praying for you!"