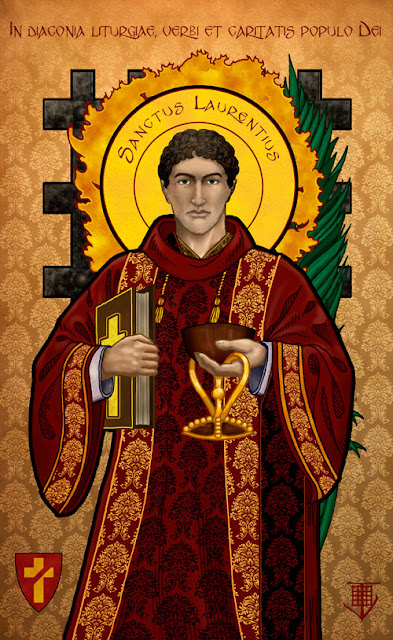 MARTYR died 10 August, 258.St. Lawrence, one of the deacons of the Roman Church, was one of the victims of the persecution of Valerian in 258, like Pope Sixtus II and many other members of the Roman clergy. At the beginning of the month of August, 258, the emperor issued an edict, commanding that all bishops, ,priests, and deacons should immediately be put to death ("episcopi et presbyteriet diacones incontinenti animadvertantur" — Cyprian Epist. lxxx, 1). This imperial command was immediately carried out in Rome. On 6 August Pope Sixtus II was apprehended in one of the catacombs, and executed forthwith ("Xistum in cimiterio animadversum sciatis VIII id. Augusti et cum eo diacones quattuor." Cyprian , ep. lxxx, 1). Two other deacons, Felicissimus and Agapitus, were put to death the same day. In the Roman Calendar of feasts of the fourth century their feast day is on the same date. Four days later, on the 10th of August of that same year, Lawrence, the last of the seven deacons, also suffered a martyr's death.  The burial-place is in the Catacomb of Cyriaca in agro Verano. source: The Catholic Encyclopedia
0
Posted by Jesus Caritas Est at 9:38 PM