Saint August 2 : St. Peter Julian Eymard the Apostle of the Eucharist and Founder 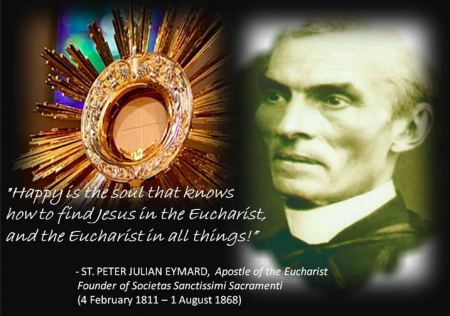 365Rosaries: “The Eucharist is the life of the people. The Eucharist gives them a center of life. All can come together without the barriers of race or language in order to celebrate the feast days of the Church. It gives them a law of life, that of charity, of which it is the source; thus it forges between them a common bond, a Christian kinship.”

Today, August 2, we celebrate the feast day of Saint Peter Julian Eymard (1811-1868), “Apostle of the Eucharist,” and founder of the Blessed Sacrament Congregation, a new society dedicated to adoration of the Blessed Sacrament. At his canonization, Pope John XXIII said of Saint Peter, “Yes, dear sons and daughters, honor and celebrate him who was so perfect an adorer of the Blessed Sacrament; after his example, always place at the center of your thoughts, of your affections, the undertakings of your zeal this incomparable source of all grace: the mystery of faith, which hides under the veils the author himself of grace, Jesus the incarnate Word.”
Peter Julian Eymard was born in Mure d'Isère in the Alpine mountains of southeastern France. His family, supported by his father who worked as an olive-presser, was rather poor, but strong in devotion to their faith. His mother inspired Peter’s devotion to Our Blessed Mother, teaching him of the Holy Eucharist, and the dangers of sin. As a child, Peter demonstrated great piety and desire to serve the Lord, promising at his first Holy Eucharist that he would become a priest. However, Peter’s father wished him to assume responsibility for the family’s small olive oil press, and discouraged his priestly endeavors. Nonetheless, Peter studied Latin on his own, and sought spiritual direction from a local missionary priest.
His father was to die while Peter was a young man, and with his mother’s permission, he entered the Oblate novitiate at Marseille. Not long after receiving the habit, he was sent home from the monastery for reasons of poor health. Near death, Peter received the Last Sacraments, and in agony prayed to the Lord for the strength, grace, and endurance to celebrate only one Mass prior to death. Monsignor de Mazenod, the local bishop of Marseille and founder of the Oblates, assisted Peter in entering the diocesan seminary, and there he was ordained at the age of 23. Peter was assigned to a small country parish, and within a few years had transformed the splintered faith community into a fervent and devoted congregation. With his healing improving, Peter felt a strong call to enter the Marist Society of Lyons. There, he was successively named to three important posts in the administration of the society. It was as Spiritual Director at one of the society’s colleges that he demonstrated great efficacy and grace in the direction of souls. The families of the students, in addition to the professors and students themselves, found their piety flourishing miraculously under his gentle influence.

Ever open to the call of the Lord, Peter felt himself being pulled in a new direction, one based upon the adoration of the Blessed Sacrament. Peter became certain that he must found a Congregation dedicated uniquely to promoting the glory and reign of Jesus in His Sacrament of Love. “You take communion to become holy, not because you already are,” he preached. However, it took some time to convince his Superior and the other members of the Marists, whom he loved, and who desired to keep him within the order. Eventually, it became clear that he must leave, and founded his new order, the Congregation of the Blessed Sacrament.
The fledgling order grew slowly but steadily, outgrowing any building it inhabited, and working to prepare adults for the sacrament of First Communion in Paris and then throughout France. Despite exhaustion, poor health, and constant opposition, Saint Peter Julian led the order, and founding a second community—Sisters of the Blessed Sacrament—as well as an Association of Priests. During these years of constant opposition, demolitions, shock and unrelenting trials, Saint Peter Julian was exhausted by the difficulties of founding not one, but two Communities — a second one for Sister-Servants of the Blessed Sacrament, as well as an Association of Priests.
In declining health, Eymard lived to see his own Congregation begin its expansion outside France in the mid 1860s. His mystical life deepened during his final years, as he came to recognize what he called the ‘gift of self’ which involved an act of total self-surrender based on the model of Christ. Today, the Servants of the Blessed Sacrament continue their devotion to the love of Christ through perpetual adoration of the Eucharist. The society, inspired by their founder, practices charitable acts throughout the world, prepares adults and children for First Communion, and models devotion and love to the saving grace of the Eucharist.
Selected Quotations of Saint Peter Julian Eymard

“If the love of Jesus in the Most Blessed Sacrament does not win our hearts, Jesus is vanquished! Our ingratitude is greater than His Goodness our malice is more powerful than His Charity.”

“Every time we come into the presence of the Eucharist we may say: This precious Testament cost Jesus Christ His life. For the Eucharist is a testament, a legacy which becomes valid only at the death of the testator. Our Lord thereby shows us His boundless love, for He Himself said there is no greater proof of love than to lay down one's life for one's friends.”
”The Holy Eucharist is the perfect expression of the love of Jesus Christ for man, since It is the quintessence of all the mysteries of His Life.”

”He loves, He hopes, He waits. If He came down on our altars on certain days only, some sinner, on being moved to repentance, might have to look for Him, and not finding Him, might have to wait. Our Lord prefers to wait Himself for the sinner for years rather than keep him waiting one instant.”

“How kind is our Sacramental Jesus! He welcomes you at any hour of the day or night. His Love never knows rest. He is always most gentle towards you. When you visit Him, He forgets your sins and speaks only of His joy, His tenderness, and His Love. By the reception He gives to you, one would think He has need of you to make Him happy.”
"Love cannot triumph unless it becomes the one passion of our life. Without such passion we may produce isolated acts of love; but our life is not really won over or consecrated to an ideal. Until we have a passionate love for our Lord in the Most Blessed Sacrament we shall accomplish nothing."

"The Eucharist is the work of a measureless love that has at its service an infinite power, the omnipotence of God."

"Have a great love for Jesus in his divine Sacrament of Love; that is the divine oasis of the desert. It is the heavenly manna of the traveler. It is the Holy Ark. It is the life and Paradise of love on earth."

"Hear Mass daily; it will prosper the whole day. All your duties will be performed the better for it, and your soul will be stronger to bear its daily cross. The Mass is the most holy act of religion; you can do nothing that can give greater glory to God or be more profitable for your soul than to hear Mass both frequently and devoutly. It is the favorite devotion of the saints."
Saint Peter Julian, who received the great privilege of so perfectly knowing what treasures are ours in the Most Blessed Sacrament, of being all afire with seraphic love for It, and of consecrating unto It your untiring zeal that It might be perpetually adored and glorified by all mankind, we beg of you to obtain for us the spiritual and temporal favors of which we stand in need.


Obtain for us particularly to become, in imitation of you, faithful adorers in spirit and in truth of the Most Blessed Sacrament, while tending ever more toward the acquiring of Christian virtue, above all, of sincere humility. Thus we hope to live that life of union with Our Lord which was the aim of your constant zeal, as it is the principal effect on Holy Communion in our souls.


Finally, Saint Peter Julian, obtain for us your own filial devotion toward Our Lady of the Most Blessed Sacrament, that we may learn from that dear Divine Mother how to serve and adore on earth Our Savior hidden in His Sacrament, and thus come to adore and glorify Him unveiled in heaven. Amen
Shared from 365RosariesBlogspot