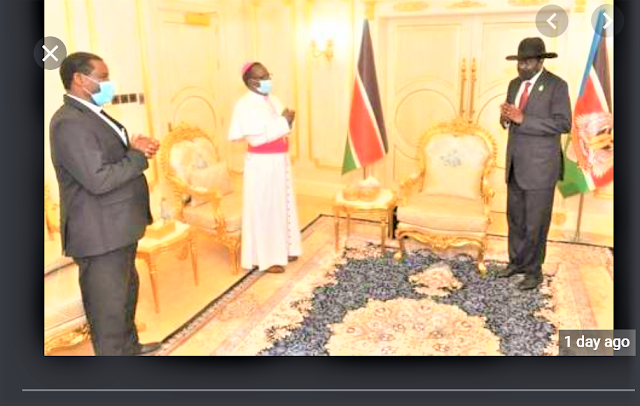 AFRICA/SOUTH SUDAN - Meeting between two Bishops and President Kiir: "Let's work together for peace"
Tuesday, 15 September 2020
Juba (Agenzia Fides) - "A very productive and successful meeting". This is how His Exc. Mgr. Barani Eduardo Hiiboro Kussala, Bishop of Tombura-Yambio, defined the meeting together with His Exc. Mgr. Stephen Amenyu, Archbishop of Juba, with the President of the Republic of South Sudan, General Salva Kiir Mayardit .
"We met the Head of State to assure him of our closeness as leader of the Church and as representatives of the Bishops' Conference, we went on behalf of the people of South Sudan to assure him our willingness to collaborate with him and to work with him and with the government for the peace and growth of our people in the Republic of South Sudan", said Mgr. Hiiboro.
The Bishop of Tombura-Yambio added that the two representatives of the Church congratulated the President for the implementation of the peace agreement reached on 31 August between the Sudanese government and a series of rebel groups (see Fides, 2/9/2020), for the formation of the national unity government, and for the decision to reduce the 32 States of the Federation to 10, which was the original number at the time of independence.
Mgr. Hiiboro encouraged the President and his collaborators and the opposition to continue to implement the peace agreement. "We told him that he is on the right path and that he should continue to work hard with his colleagues in order to consolidate peace in the Country", said Mgr. Hiiboro. "We underlined the fact that although it is complex and difficult to implement the peace agreement, we must not give in to the temptation to return to war, but we must work tirelessly to restore peace in the Republic of South Sudan". "The President has also assured that he will never bring the Republic of South Sudan back to war", reports Mgr. Hiiboro.
The two Bishops also informed the Head of State on the feelings of the people, on the desire for peace widespread among the population, on their sufferings and on everything that happens in the Country due to war, and they assured the Church's readiness to continue to collaborate with the government and other partners for peace.
Mgr. Hiiboro reported that the President said he was happy to meet the two representatives of the Catholic Church, and "appreciated everything we talked about". As for the coronavirus pandemic and the closure of places of worship, the President authorized the reopening of churches in compliance with precautionary measures.
"The President said that the government cannot do without the Church. We need it just as we did during the struggle for liberation, when the Church was there to unite", concluded Mgr. Hiiboro. (L.M.) (FULL TEXT - Agenzia Fides, 15/9/2020)