Bishops of Poland discuss LGBT, Gender, and Abuse during Meeting and Stress the Church's Teachings 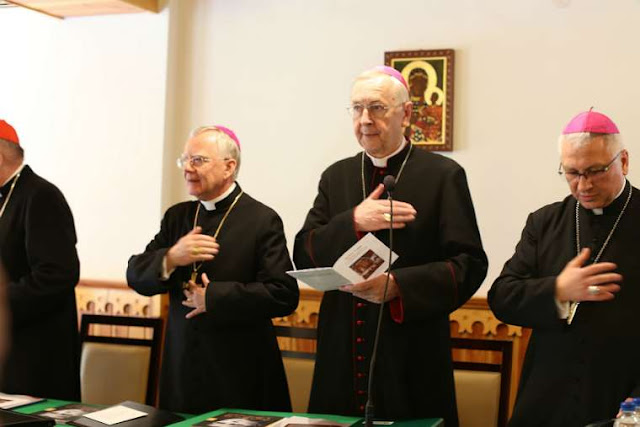 Catholic bishops in Poland now have an official “position on the question of LGBT+”. They say that LGBT people, like all others, deserve respect, the bishops say that this “does not mean accepting their views uncritically”.
The bishops during their assembly also rejected “the right of a person to self-determine their gender without reference to objective criteria determined by their genome and anatomy”, and including the “radical separation between biological sex and cultural gender“.
FULL TEXT : Communication of the Polish Episcopate: 30 years of religion lessons at school, return to churches for Mass and protection of minors 31-08-2020

Religion lessons at school, the response to the drama of the sexual abuse of minors by some clergy, the position on LGBT+, and the encouragement for believers to return to churches for Mass after the pandemic were the main issues raised at the 386th Plenary Assembly of the Polish Bishops’ Conference, which was held at Jasna Góra from 27 to 29 August.

With regard to the 30th anniversary of the return of religion lessons to school, one of the topics of the plenary assembly was the state of religious education, programming, and proper preparation and formation of catechists.

The second topic addressed by the Plenary Assembly concerned issues related to pastoral care. “In a situation of a normalizing social life, the bishops encourage – while maintaining all sanitary standards – the rebuilding of parish communities gathering around the altar at Sunday Mass” – wrote the bishops in the Communication. They also thanked all those who, during the period of isolation, organised the broadcast of Masses and prayers in the media, including social media.


The bishops expressed their gratitude to health care workers who, at the risk of their own lives, help those who are threatened by COVID-19.

During the assembly, the bishops analysed the activities of the Church in Poland, which were taken in response to the drama of sexual abuse of minors by some clergy. “This response is only possible through honest and consistent accountability for every crime actually committed and assistance to the victims, as well as an explanation of negligence” – wrote the bishops. They also informed, among other things, about the activities of the Saint Joseph Foundation of the Polish Bishops’ Conference.

In the next point of the Communication, the bishops expressed their “strong opposition to all forms of aggression and violence in public and economic space”, as well as their concern about the increasingly frequent cases of profanation of places of worship and religious symbols.

The bishops adopted the “Position of the Polish Bishops’ Conference on LGBT+”. “The document stresses the need to respect people who identify themselves with LGBT+. At the same time, it opposes the attempts of these communities to dominate social life, especially by wanting to equate same-sex unions with marriages and granting them the right to adopt children.”

The Bishops express their gratitude to the missionaries for staying in their mission stations during the pandemic. On the 40th anniversary of “August 1980”, the bishops remember with gratitude the social movement “Solidarność”.

Press Office of the Polish Bishops’ Conference
Source: https://episkopat.pl/news/ - 27 - page Document by the Bishops
https://info.wiara.pl/files/20/08/28/609063_ZDfi_EpiskopatuPolskiwkwestiiLGBT.pdf
Posted by Jesus Caritas Est at 9:50 AM