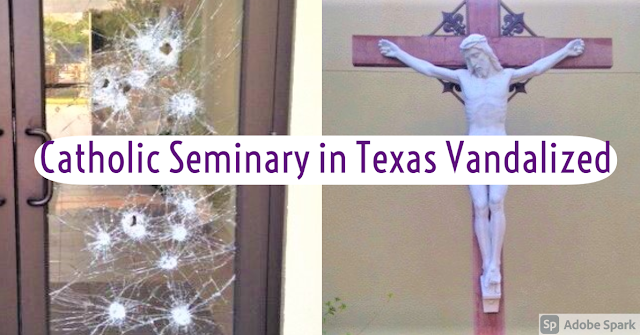 Discernment house, crucifix vandalized at Assumption Seminary
Assumption Seminary received damage to an outdoor crucifix and five glass doors of the discernment house on campus during an act of vandalism which occurred at just after 10 p.m. Thursday night, September 24. San Antonio Police Department (SAPD) officers are currently investigating the incident and are searching for a suspect.
According to Father Hy Nguyen, PSS, seminary rector, at 10:05 p.m. last night an unidentified man was observed walking up to a dormitory building holding a baseball bat, and the individual began striking the glass doors repeatedly. Law enforcement was immediately notified, but the suspect fled the area before the police arrived.
In addition to the damage done to the doors during last night’s attack, a San Antonio Spurs NBA jersey was placed around the head of an image of Jesus and a foot was broken on the corpus of that same outdoor crucifix adjacent to Our Lady’s Chapel. The chapel is beside the discernment house.
No one was injured, and clean-up and repairs were underway this morning, September 25.
“First and foremost, all of our seminarians and all the people at the seminary are safe,” Father Nguyen said. “We ask for your prayers for this misguided person, and for the safety of the Assumption community.”
Archbishop Gustavo García-Siller, MSpS, expressed his gratitude to the Father Nguyen and Father Daniel Villarreal, director of Vocations and Seminarians for the Archdiocese of San Antonio, for their attentiveness to this unexpected situation.
He added, “This disturbing event can lead us to know that Jesus on the Cross gave us His Body and Blood, His whole being, for our salvation. It is a reminder that we are called to love one another as He loved us. We pray for the person who committed this painful act; he is in our prayers. As with many other things that have been happening in this regard, may our hurt lead us to love even more, and even better. We assure our seminarians of our prayers and our support as we seek resolution to this.”
FULL TEXT Source: Facebook Page of the Archdiocese of San Antonio
Posted by Jesus Caritas Est at 10:33 AM

May Our Lady of Perpetual Help continue to protect you and your boys, Fr. Glory to Jesus Christ!