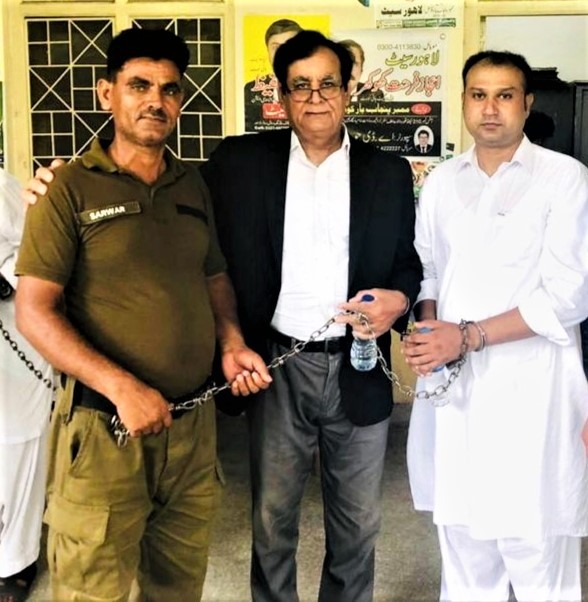 Blasphemy: Hunger strike for Asif Pervaiz, on death row, and 24 imprisoned Christians
by Shafique Khokhar
In Karachi, Shabbir Shafqat, president of the National Christian Party, calls for a revision of the law on blasphemy and punishment for those who make false accusations for secondary reasons. "These cases are driving many minority members to leave the country." The condemnation of the UN Commission for Human Rights.


Karachi (AsiaNews) - A one-day hunger strike in support of Asif Pervaiz(pictured above), sentenced to death for blasphemy, and for 24 other Christians in prison, unjustly accused of the same crime was held on 9 September by the National Christian Party (Ncp) of Karachi, which calls for the revision of this law on blasphemy, also suggesting penalties for those who for second reasons make false accusations of blasphemy.

Shabbir Shafqat, president of the NCP, strongly condemned the death sentence of Asif Pervaiz, accused of blasphemy by his employer, who tried to push him to convert to Islam. After his refusal, Asif was accused of having sent text messages offensive of Islam and Muhammad.

Shabbir denounces that the death sentence is the result of undue pressure on the justice system which leads to discriminatory sentences. In Asif's case, it is by no means proven that the messages were sent by him; there was no forensic investigation to see from which phone the messages were sent. The police only concluded the case based on the statements of the prosecution.

“These cases and false accusations - said Shabbir - are totally based on discrimination. I am very afraid for the future of minorities in Pakistan. These cases are driving many minority members to leave the country. We must pray for our nation, for the police in Pakistan and for the judicial system. "

On 8 September, the UN Commission for Human Rights asked the Pakistani government to take immediate and concrete measures to avoid the manipulation of the blasphemy law, also ensuring the protection of journalists and human rights defenders, subject to threats.

UN human rights spokesperson, Rupert Colville, speaking on the same day of the death sentence against Asif Pervaiz, said: ““We have followed with increasing concern numerous instances of incitement to violence — online and offline — against journalists and human rights defenders in Pakistan, in particular against women and minorities. Especially worrying are accusations of blasphemy, which can put accused individuals at imminent risk of violence.”
FULL TEXT Source: Asia News IT
Image Source: Morning Star News