President of India Gives Award to Catholic Carmelite Nun for Social Work - Her Motto "Not me, but you" 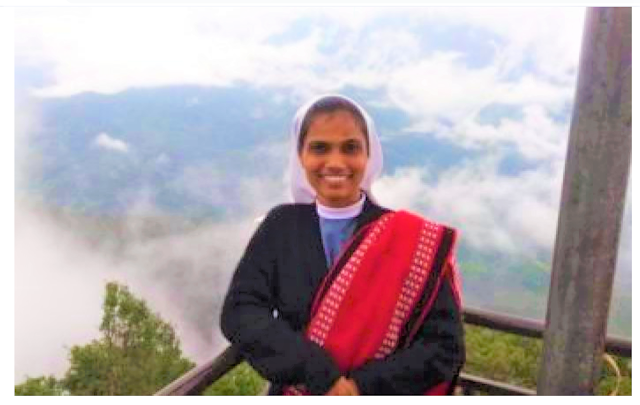 Asia News reports that the Indian president gave an award to Carmelite nun from Manipur
by Biju Veticad
Sister William Parmar, a member of the Carmelites of Charity of Vedruna, received the recognition for her work with the National Service Scheme. Her projects include public toilets, sewage canals, and waste treatment plants. Her work is inspired by the motto "Not me, but you".


New Delhi (AsiaNews) – A nun from the northeastern Indian state of Manipur received a special award from the President of India for her work on social issues and environmental protection within the government's National Service Scheme (NSS).

Active in the Swachh Bharath (Clean India) campaign, Sister William Parmar, a member of the Carmelites of Charity of Vedruna, received the award last Thursday from the hands of President Ram Nad Kovindh and Youth Affairs Minister Kiren Rijiju. The award was also given to 42 other recipients.

Sister Parmar, 39, is in charge of projects drafted and developed within the NSS, a government programme launched in 1969 under the aegis of the Ministry of Youth Affairs and Sports to develop the personality of students through community service.

The nun works at the Don Bosco Salesian College in Maram, Senapati district (Manipur) and has promoted several leading projects for the institute, such as public toilets, urinals, waiting sheds, sewage canals, waste treatment plants and ponds, and much more. One of the best projects is the manufacture of dust bins from bamboo and tin.

Her work is inspired by the motto "Not me, but you,” defined by a sense of altruism and the desire to serve one’s neighbours first of all, as her colleagues and teaching staff at the Don Bosco Salesian college can attest.

The nun has promoted activities in the fields of literacy among the poorest students, environmental protection by promoting the planting of 19,000 trees, health and personal hygiene, as well as the fight against HIV/AIDS and malaria.

Speaking to AsiaNews, Don Bosco Salesian College Dean Fr K O Sebastian stressed that "this is the third time that our college gets an award from the central government of India for valuable services rendered by the NSS unit of our college.”

In 2018, he explained, Sister Pramar was one of three winners of the Swachh Bharath Hero award, awarded by the Indian Prime Minister. The college "is located in a rural area, where some indigenous Manipur tribes predominate.”

The school plans to teach "with a missionary approach, keeping access to higher education equitable and affordable to the underprivileged, the marginalised and the deserving”.

"Sister Pramar,” Fr Sebastian noted, “was able to go beyond normal working conditions to provide dedicated community service to the tribal people living near the college, along with her teaching.”
Source: Asia News IT