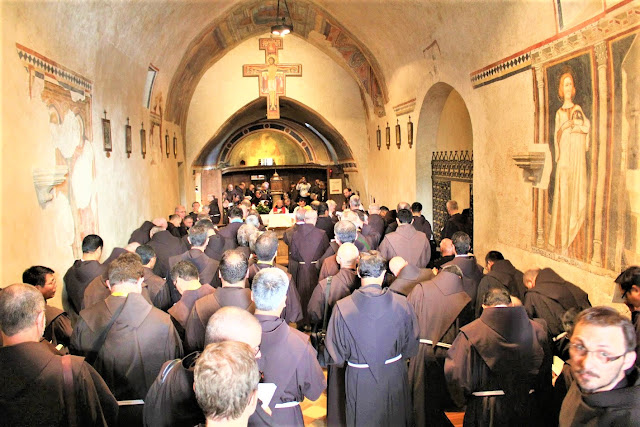 Two Franciscans die from COVID-19 in Aleppo as sanctions stop testing and medical imports
Four out of five priests contracted the virus and two, Fr Edward Tamar and Fr Firas Hejazin, have died. At the peak of the emergency, up to ten Christians died a day. International sanctions hinder testing and medical imports needed to fight the pandemic. The situation is worse than during the war.

At the height of the pandemic, “We have buried 10 victims a day in the Christian community alone,” the prelate he said. Since then, “the death rate seems to have declined and the number is constantly decreasing".

However, two Franciscan friars have died from COVID-19. “Unfortunately, the two were at the Holy Land college. Fr Edward Tamer (pictured) was 82 but in good condition and Fr Firas Hejazin was 49. What a tragedy!"

The SARS-CoV-2 virus has not spared Aleppo, Syria’s main economic centre, but the number of cases and victims remains uncertain because of limited testing and incomplete data provided by the authorities.

What is certain that of four of the five Franciscan Fathers present in the city contracted the virus and two of them have died. Fr Ibrahim Alsabagh, of the Latin parish, is the only one who has been spared.

In a letter to Crux, an online US Catholic paper, he complains of the state of "precariousness and lack of hospitals, medicines, doctors and nurses.”

Despite the lack of accurate data, the proportion of priests affected by the coronavirus can be projected onto the population in order to understand the magnitude of the pandemic.

In his letter, the clergyman describes the work of raising awareness among members of his parish and across the city, from social distancing to wearing masks, to "avoid a larger catastrophe.”

According to some estimates, at the height of the pandemic, the pandemic had hundreds of victims, up to 800 a day.

Bishop Abou Khazen notes that “the virus circulation was huge, but now things have improved a bit. Regulations, like the obligation to wear a mask, social distancing, and a ban on large gatherings and events, have worked.”

"Today traffic has resumed, schools reopened on 13 September and we are trying to see what the effects may be.”

Syria officially has reported 3,700 cases and 162 deaths, but it is clear that the number is far higher.

“We lack means and only recently Aleppo and Damascus got a facility to examine testing results. This is the effect of the international sanctions against Syria, which once again have hit the weakest segments of the population ".

“The worst time for infections and deaths was between June and August” so much so that “we had to close the churches and carry out Masses and celebrations via the internet.”

Four weeks ago, "we resumed in-person services,” but “with all possible precautions,” Bishop Abou Khazen said. “Funerals are held in cemeteries, whilst participation in baptisms and weddings is reserved for immediate family members.”

"Here people say that it was better during the war, because today we have to fight against the virus, inflation, the cost of living. Buying petrol can take up three or four days. It can take hours to buy some bread . . . Ours is a tragedy within a tragedy.”

Sometimes, “even we Christian leaders don't know what to say, but we just try to stay with people and help as much as possible. International sanctions also affect us and our ability to provide assistance and aid.

Increasingly, “We hear people say they were wrong not to run away. With this virus it is increasingly difficult to bring our solidarity to families and this makes people suffer even more.”
FULL TEXT Source: AsiaNews.IT - Image Source: OFM.org