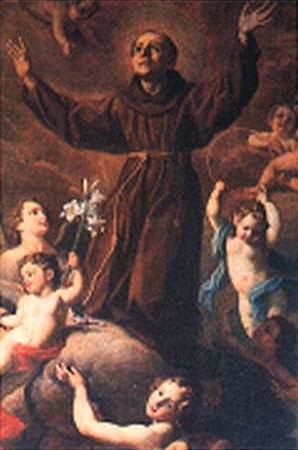 Born at San Severino, in the March of Ancona, 1 March, 1653; died there 24 September, 1721; the son of Antonio M. Divini and Mariangela Bruni. His parents died soon after his confirmation when three years old; he suffered many hardships until in December, 1670, he took the Franciscan habit in the Order of the Reformati, at Forano, in the March of Ancona, and was ordained on 4 June, 1678, subsequently becoming Lector or Professor of Philosophy (1680-83) for the younger members of the order, after which, for five or six years, he laboured as a missionary among the people of the surrounding country. He then suffered lameness, deafness, and blindness for nearly twenty-nine years. Unable to give missions, he cultivated more the contemplative life. He bore his ills with angelic patience, worked several miracles, and was favoured by God with ecstasies. Though a constant sufferer, he held the post of guardian in the monastery of Maria delle Grazie in San Severino (1692-3), where he died. His cause for beatification was begun in 1740; he was beatified by Pius VI, 4 August, 1786, and solemnly canonized by Gregory XVI, 26 May, 1839. His feast is celebrated on 24 September. Text from the Catholic Encyclopedia