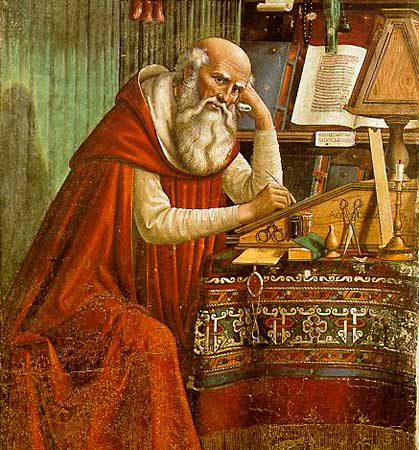 DOCTOR OF THE CHURCH

340-342, Stridon, on the border of Dalmatia and Pannonia
Died:
420, Bethlehem, Judea
Major Shrine:
Basilica of Saint Mary Major, Rome, Italy
Patron of:
archeologists; archivists; Bible scholars; librarians; libraries; schoolchildren; students; translators
Born at Stridon, a town on the confines of Dalmatia and Pannonia, about the year 340-2; died at Bethlehem, 30 September, 420. He went to Rome, probably about 360, where he was baptized, and became interested in ecclesiastical matters. From Rome he went to Trier, famous for its schools, and there began his theological studies. Later he went to Aquileia, and towards 373 he set out on a journey to the East. He settled first in Antioch, where he heard Apollinaris of Laodicea, one of the first exegetes of that time and not yet separated from the Church. From 374-9 Jerome led an ascetical life in the desert of Chalcis, southwest of Antioch. Ordained priest at Antioch, he went to Constantinople (380-81), where a friendship sprang up between him and St. Gregory of Nazianzus. From 382 to August 385 he made another sojourn in Rome, not far from Pope Damasus. When the latter died (11 December, 384) his position became a very difficult one. His harsh criticisms had made him bitter enemies, who tried to ruin him. After a few months he was compelled to leave Rome. By way of Antioch and Alexandria he reached Bethlehem, in 386. He settled there in a monastery near a convent founded by two Roman ladies, Paula and Eustochium, who followed him to Palestine. Henceforth he led a life of asceticism and study; but even then he was troubled by controversies which will be mentioned later, one with Rufinus and the other with the Pelagians.
Chronology
The literary activity of St. Jerome, although very prolific, may be summed up under a few principal heads: works on the Bible; theological controversies; historical works; various letters; translations. But perhaps the chronology of his more important writings will enable us to follow more easily the development of his studies.
A first period extends to his sojourn in Rome (382), a period of preparation. From this period we have the translation of the homilies of Origen on Jeremias, Ezechiel, and Isaias (379-81), and about the same time the translation of the Chronicle of Eusebius; then the "Vita S. Pauli, prima eremitae" (374-379).
A second period extends from his sojourn in Rome to the beginning of the translation of the Old Testament from the Hebrew (382-390). During this period the exegetical vocation of St. Jerome asserted itself under the influence of Pope Damasus, and took definite shape when the opposition of the ecclesiastics of Rome compelled the caustic Dalmatian to renounce ecclesiastical advancement and retire to Bethlehem. In 384 we have the correction of the Latin version of the Four Gospels; in 385, the Epistles of St. Paul; in 384, a first revision of the Latin Psalms according to the accepted text of the Septuagint (Roman Psalter); in 384, the revision of the Latin version of the Book of Job, after the accepted version of the Septuagint; between 386 and 391 a second revision of the Latin Psalter, this time according to the text of the "Hexapla" of Origen (Gallican Psalter, embodied in the Vulgate). It is doubtful whether he revised the entire version of the Old Testament according to the Greek of the Septuagint. In 382-383 "Altercatio Luciferiani et Orthodoxi" and "De perpetua Virginitate B. Mariae; adversus Helvidium". In 387-388, commentaries on the Epistles to Philemon, to the Galatians, to the Ephesians, to Titus; and in 389-390, on Ecclesiastes.
Between 390 and 405, St. Jerome gave all his attention to the translation of the Old Testament according to the Hebrew, but this work alternated with many others. Between 390-394 he translated the Books of Samuel and of Kings, Job, Proverbs, Ecclesiastes, the Canticle of Canticles, Esdras, and Paralipomena. In 390 he translated the treatise "De Spiritu Sancto" of Didymus of Alexandria; in 389-90, he drew up his "Quaestiones hebraicae in Genesim" and "De interpretatione nominum hebraicorum." In 391-92 he wrote the "Vita S. Hilarionis", the "Vita Malchi, monachi captivi", and commentaries on Nahum, Micheas, Sophonias, Aggeus, Habacuc. In 392-93, "De viris illustribus", and "Adversus Jovinianum"; in 395, commentaries on Jonas and Abdias; in 398, revision of the remainder of the Latin version of the New Testament, and about that time commentaries on chapters 13-23 of Isaias; in 398, an unfinished work "Contra Joannem Hierosolymitanum"; in 401, "Apologeticum adversus Rufinum"; between 403-406, "Contra Vigilantium"; finally from 398 to 405, completion of the version of the Old Testament according to the Hebrew.
In the last period of his life, from 405 to 420, St. Jerome took up the series of his commentaries interrupted for seven years. In 406, he commented on Osee, Joel, Amos, Zacharias, Malachias; in 408, on Daniel; from 408 to 410, on the remainder of Isaias; from 410 to 415, on Ezechiel; from 415-420, on Jeremias. From 401 to 410 date what is left of his sermons; treatises on St. Mark, homilies on the Psalms, on various subjects, and on the Gospels; in 415, "Dialogi contra Pelagianos".
Text shared from The Catholic Encyclopedia