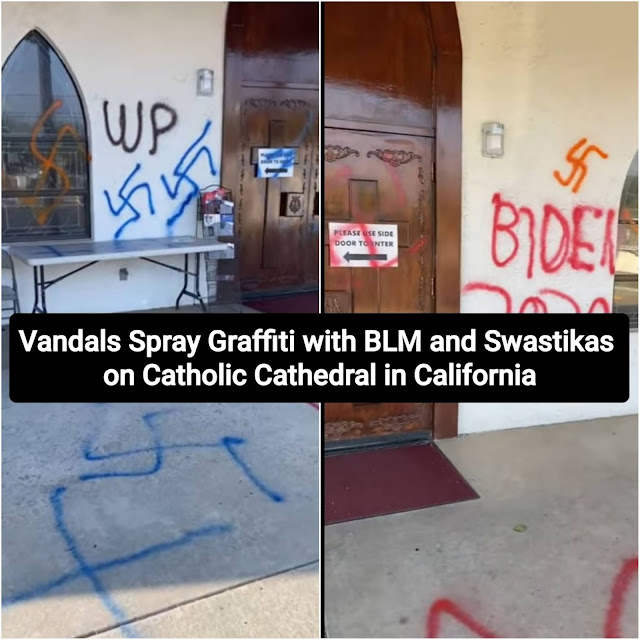 According to several news outlets vandals attacked two Catholic Churches in El Cajon, California with graffiti on Saturday, September 26, 2020.  Father Daniel Shaba of the St. Peter's Chaldean Catholic Cathedral said, "It's very devastating, "We fled persecution in Iraq, and here we are facing it again, in a place where we thought we wouldn't." (10News.com) Our Mother of Perpetual Help Catholic Church, also received similar graffiti with swastikas, white power, pentagrams, the Black Lives Matter acronym BLM, and "Biden 2020." "
Father Shaba found the graffiti Saturday morning at St. Peter's. He posted a video of it on twitter. Parishioners with power washers and paintbrushes helped Father Shaba clean upthe Cathedral. Everything was covered up or washed away. Father Shaba explained, "We had an enormous amount of people come and see how they could help us in any way, shape, or form. But to also hold tight to Jesus." Police are investigating both instances. In a statement, they said there is "no tolerance for these crimes occurring in our communities." Father Shaba says surveillance cameras caught footage of the vandals. He also has a message for the vandals. "To the people who did this, we will pray for you.
Source: Facebook Page of St. Peter's Chaldean Catholic Cathedral  and 10news.com
Posted by Jesus Caritas Est at 8:50 PM