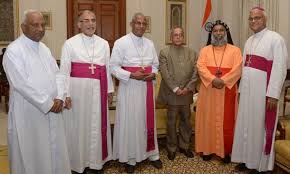 Vatican News reports that in India, three bishops are on hunger strike for educational rights.
VaticanNews.va Report:
Protesting against the infringement on the constitutional rights of Catholic educational institutions, three bishops in India advocate for the payment of teachers’ salaries in state-aided Church-run schools in Kerala.
By Vatican News staff writer
Three bishops in India sat on a day-long hunger strike, accusing the Kerala provincial government of denying Christian educational institutions their constitutional rights.
Bishop Joshua Mar Ignathios of Mavelikkara, chairman of the Kerala Bishops’ Council (KCBC) Education Commission, its vice-chairman, Bishop Paul Anthony Mullassery of Kollam and Auxiliary Bishop Thomas Tharayil of Changanassery, spent Tuesday in front of the Kerala state secretariat without food or water.
Two other Catholic officials joined the bishops in their protests. Simultaneous protests were also organized in all the 14 district headquarters in the state.
Unpaid salaries
Explaining the cause for the protests, Archbishop Maria Calist Soosa Pakiam of Trivandrum pointed out that in five years, the more than 3000 teachers in Church-run state-aided schools have not been paid salaries. Denying salaries, especially during these challenging times of the Covid-19 health crisis was, he said, “an act of cruelty.”
The government “curtails our rights as a religious minority to run education institutions through arbitrary orders and amendments to the existing laws.”
Archbishop Pakiam added that the protest aims to seek “no special favors from the state.” Rather, “it is to ensure our constitutional rights.”
The Church currently runs about 5,000 of Kerala’s 13,000 schools. More than half of the Church-run schools are entitled to government funding to pay salaries for a number of teachers.
Christians make up 2.3 percent of India’s 1.3 billion population. In Kerala State, 18 percent of its 33 million people are Christian.
Continuous protests
Father Charles Leon, KCBC secretary explained that the Tuesday strike was the start of a state-wide protest.
“It is not a one-day affair, it is an indefinite protest,” he said, adding that the state government is also “trying to meddle in the appointment of teachers in the state-aided schools.”
The government categorized about 4,000 teachers in mostly state-run schools as “protected teachers”, aiming to keep them employed even when the state closes down schools. However, the government has tried to use the resettling of these teachers to appoint a sizeable percentage of teaching staff in Church-managed schools.
“We were told then that it was a one-time settlement,” Fr. Leon explained. “But now the government wants to continue to appoint fifty percent of teachers in our state-aided schools in complete breach of constitutional provisions.”
Constitutional rights
Speaking on the constitutional provisions in this regard, Cardinal Baselios Cleemis Catholicos, the head of the Syro-Malankara Catholic Church said that the constitution gives minority schools the right to appoint teachers.
However, he added, “it is a gross injustice” that the government has stalled the appointments these past five years.
Source: VaticanNews.va