#BreakingNews 2000 People at March for Life in Austria with Youth, Families and Bishops - VIDEO 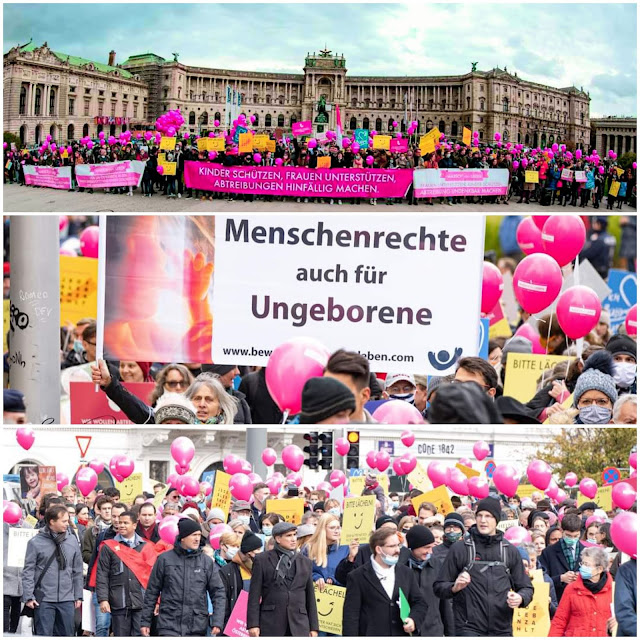 About 2000 people attended the annual March for Life in Vienna, Austria. There were some counter-demonstrators, and hundreds of police officers. Bishop Küng said to the participants: Put on the armor of God and remember the commandment "You shall not kill" -
"We are pro life, we are pro-life" was among the slogans that the 2000 marchers repeated. The march took place in Vienna on Saturday, October 17, 2020 in the afternoon despite the Corana virus.  Before marching about 150 people took part in a Holy Mass in the beautiful Karlskirche with St. Pölten's former bishop Klaus Küng. The Auxiliary Bishop Laun, was also present. “Putting on the armor of God is good advice because it is appropriate to remember God's command,“ You shall not kill, ”even if people do not like it. It applies to children in the womb as well as to old or sick people, especially those who are tired of life,” the bishop explained to the people. Later the bishop also encouraged the protectors of life on the stage  and also personally took part in the 2-hour march through the city center. Also, participating was the Viennese auxiliary bishop Stephan Turnovszky, many young people and families. The well-known Leni Kesselstatt and the head of Pro-Life-Europe also spoke at the podium in front of the church.
During the march through the city center that followed, there were  some aggressive left-wing demonstrators. A hundred policemen with police buses, who were later called in, ensured that everything went smoothly. A police helicopter circled over downtown Vienna.
At the end of the march, once again arriving at the Karlskirche, the young singer Veronika encouraged the crowd with her song specially composed for the march. Veronika had already participated in the march last year and would now like to use her music for something good. The song "Pro Life Generation" is for the unborn babies and also stands behind the women. In the end, the organizers invited everyone for the march in 2021. Date: October 16, 2021 - Save the Date - see you in Vienna!