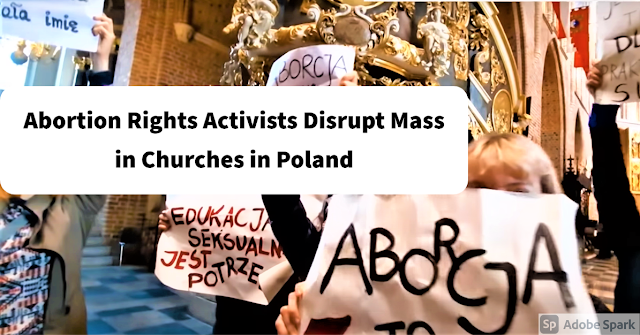 Abortion activists in Poland entered Catholic Churches on Sunday, October 25, 2020 as they protested a court ruling prohibiting abortions on unborn babies with disabilities.
Reports show pro-abortion rioters vandalized and entered churches in several cities across the country.
Graffiti was sprayed on church walls in various cities and towns reading ‘Women’s hell’ and other slogans.
Archbishop Stanisław Gądecki issued an appeal for peace after his church was attacked by pro-abortion activists.
On Thursday, its constitutional court ruled against one of the few exceptions allowed in its 1993 abortion law – abortions on unborn babies with disabilities.
Poland still allows abortions in cases of rape, incest or threats to the mother’s life.
“One cannot kill a child for being sick. This is not a fetus, it is a child,” MP Maria Kurowska, of United Poland, said to Reuters.
Full text of the Statement:
THE CHAIRMAN OF THE POLISH BISHOPS 'CONFERENCE AFTER SUNDAY DEFANCES OF CHURCHES The decision of the Constitutional Tribunal - concerning the protection of the life of sick children - caused extremely emotional reactions from many people in our country.
The very position of the Catholic Church on the right to life is unchanging and publicly known. “A conscious and voluntary decision to kill an innocent human being is always wrong from a moral point of view and can never be permitted either as an end or as a means to a good end. For it is an act of serious disobedience to the moral law, moreover, to God himself, its creator and guarantor; it is an act contrary to the fundamental virtues of justice and love. «Nothing and no one can give the right to kill an innocent human being, be it an embryo or a fetus, a child or an adult, an old person, terminally ill or dying. Moreover, no one may demand that this act of murder be committed against himself or against another person entrusted to his care, nor may he directly or indirectly consent to it.
However, I would like to remind you that it is not the Church that constitutes the law in our homeland and it is not bishops who make decisions on the compliance or non-compliance of statutes with the Polish Constitution. For her part, the Church cannot cease to defend life, nor can she fail to proclaim that every human being must be protected from conception until natural death. On this point, the Church, as Pope Francis often says, cannot compromise, because it would be guilty of a culture of rejection that is so widespread today, always affecting the most needy and vulnerable. “It would seem that a part of humanity can be sacrificed for the sake of a selection that favors a social group that deserves an unlimited life. In fact, "people are no longer seen as a fundamental value that must be respected and protected,
Profanity, violence, abusive inscriptions and religious service disruptions and profanations, which have been perpetrated in recent days - although they may help some people defuse their emotions - are not the right way to act in a democratic country. I express my sadness that today in many churches, believers have been prevented from praying and the right to profess their faith has been forcibly taken away.
I am asking everyone to express their views in a socially acceptable way, respecting the dignity of every human being. We need a conversation, not confrontational attitudes or feverish exchanges of opinions on social networks. "Authentic social dialogue," Pope Francis writes, presupposes the ability to respect the point of view of another by accepting that he or she may have certain beliefs or legitimate interests "(Fratelli tutti, 203).
Once again, I encourage everyone to a dialogue on how to protect the right to life and women's rights. I am asking journalists and politicians not to escalate tensions in a sense of responsibility for social peace.
I am asking all the faithful for prayers for unborn children, for parents expecting children, and for the conversion of those who use violence.
✠ Stanisław Gądecki
Archbishop Metropolitan of Poznań
President of the Polish Bishops 'Conference
Vice-President of the Council of European Bishops' Conferences (CCEE)
Poznań, October 25, 2020
https://episkopat.pl/przewodniczacy-episkopatu-po-niedzielnych-profanacjach-kosciolow/