#BreakingNews Powerful Video Statement by Archbishop of New Orleans on Desecration of Altar, which was then Burned, and Abuse by Priests - FULL TEXT 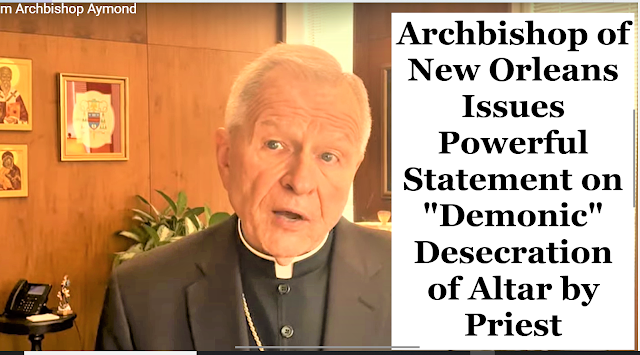 It is a very tough time right now to be a Catholic in the archdiocese of New Orleans, to say the least. Many people feel anger betrayal and disappointment and I feel the same way as do my brother priests. What has happened concerning Pat Wattigny and Travis Clark is unacceptable. It's sinful and it cannot be tolerated.
SEE ALSO: Police Arrest Priest at Church in Louisiana while Filming Pornography at Altar with 2 Women https://www.catholicnewsworld.com/2020/10/police-arrest-priest-at-church-in-la.html
Let me be clear both were removed for ministry immediately and will never serve again in Catholic ministry.  Regarding Travis, his obscene behavior was deplorable his desecration of the altar in the church was demonic and I am infuriated by his actions. When the details became clear, we had the altar removed and burned. I will consecrate a new altar tomorrow. Regarding Pat Wattigny when he informed us of the sexual abuse of a minor which occurred in December 2013 I immediately moved him from  ministry and reported it to civil authorities and made a public announcement. There was no prior accusation and we  knew nothing about the abuse before October the 1st 2020. There are  questions about the texts in February 2020 we received copies of text messages between Wattigny and a teenager though not sexual in nature. Our technology policy forbids this type of communication this was addressed and the text messages stopped. A few months later we received a report that he had resumed texting we asked him to resign as chaplain for violating the technology policy. Why was this not reported more widely; the text did not indicate abuse and there was no allegation of sexual abuse. I am truly truly sorry for the pain that  this has caused Wattigny was ordered to undergo a series of psychological exams and to make a 30-day retreat. At the conclusion of the psychological assessment he admitted the sexual abuse of a minor which took place in December 2013. We must always pray for this victim and all victims of sexual abuse. We have a strong fraternity of priests in the archdiocese. I will meet with the priests next week to discuss this in detail we have many good priests and I regret that they are embarrassed by the actions of a few our focus as we move forward is to continue the ministry of  Jesus Christ including a strong focus on the protection of children. Once again I share your anger and your feelings of betrayal god is faithful may he continue to strengthen and renew our church in this very challenging time.