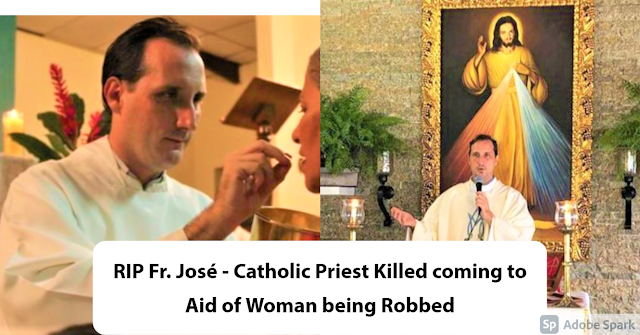 AMERICA/VENEZUELA - A priest killed during a robbery Thursday, 22 October 2020 Cojedes (Agenzia Fides) -
The Bishop of the diocese of San Carlos de Venezuela, Mgr. Polito Rodríguez Méndez, as well as the Congregation of the Priests of the Sacred Heart of Jesus (Dehonians), issued a statement to inform about the violent death of Father José Manuel de Jesus Ferreira, parish priest of the Diocesan Eucharistic Shrine of San Juan Bautista. The murder took place on Tuesday 20 October, after the priest had celebrated Mass in the presence of a few people, due to the pandemic, while he was greeting them outside the church, on the street. The statement concludes by asking to pray for the priest.
The Venezuelan Episcopal Conference, which condemned the fact, reports in a note sent to Fides the words of Mgr. Polito Rodríguez Méndez: "the priest, while he was greeting this small group of people, saw a woman who had just been robbed. The priest immediately went to help her and was gunshot. Until the last moment, Father José Manuel did good". Despite being taken to San Carlos hospital, the priest died soon after. The funeral was celebrated yesterday at the Parish where he responsible. Father José Manuel was born in Caracas (Venezuela) on November 25, 1980, son of Portuguese immigrants. He entered the Congregation of Priests of the Sacred Heart of Jesus in 2000. He was ordained a priest on December 19, 2009. He was currently parish priest at "San Juan" Eucharistic shrine, where he had begun the restoration of the shrine which dates back to the colonial era and was promoting various social activities in favor of the most disadvantaged. Among other tasks, he was responsible for the missionary pastoral care of the diocese of San Carlos. Those who knew him remember his charismatic and dynamic spirit, always interested in developing innovative activities. Affable and calm, he was always available to help his brothers. (CE) (Source; Agenzia Fides, 22/10/2020)
Posted by Jesus Caritas Est at 9:32 AM