Carlo Acutis is a Techy Teen on his Way to becoming a Saint - Who Created a Website on the Eucharist! 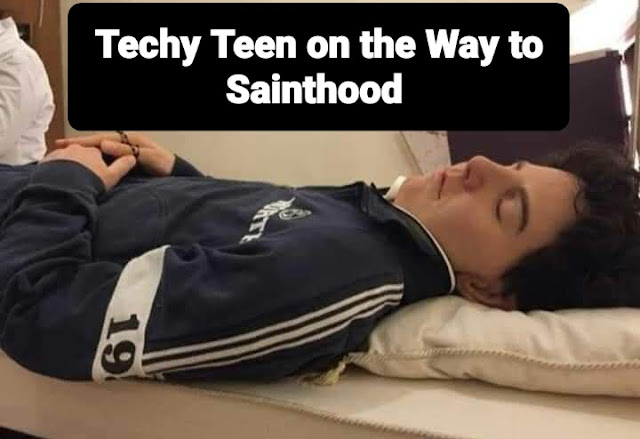 Carlo Acutis, was a teen whose saintly life is being celebrated in Assisi.
He was born in London and lived in Milan, and died of leukemia. His remains were moved to the Umbrian city, where he had asked to be buried


Carlo Acutis and will become Blessed in October. The Church celebrates this young man who died when he was 15 due to leukemia. A young man who in life until the end was an example of hope and faith. A point of reference for many young people.

The story of Carlo, who asked to be buried in Assisi, has already been around the world. And the beatification, which will take place in Assisi on Saturday 10 October at 4.30 pm in the Basilicia of San Francesco, traces the way towards the boy's holiness.

"We will open a soup kitchen for the poor not far from the Shrine of the Spoliation and every year we will support a project in Third World countries to help them create the conditions for a solidarity economy". This was announced by the bishop of the diocese of Assisi, Monsignor Domenico Sorrentino, at the end of the ceremony that today started the events collateral to the beatification.

At the end of the celebration in the Sanctuary of the Spoliation, which was also attended by Carlo's parents, the mayor of Assisi, Stefania Proietti and the deputy mayor Valter Stoppini, the tomb with the body of the young man was opened and will remain visible until 17 October.

Carlo Acutis and Saint Francis “had in common, in addition to love for Jesus and in particular for the Eucharist - said the bishop - a great love for the poor. This is why we decided that, in a circumstance like this, it was necessary to leave a strong mark; and what better sign than that of charity? ».

In the course of the homily, the bishop - a note from the diocese reports - underlined the importance of the example of the young blessed for young people: "Charles had a mission especially for his peers in this time so exciting and, disoriented. A time where wonderful things are experienced through a technology that unites the world from one end to the other, but which often becomes a tumult of contradictory information and messages, in which it is so difficult to find the compass of truth and love. Carlo is a boy of our time. A boy of the internet age, and a model of holiness of the digital age, as Pope Francis presented him in his letter to young people around the world. The computer, with its website of miracles, has become its way of going through the streets of the world, like the first disciples of Jesus, to bring to hearts and homes the announcement of true peace, that which quenches the thirst for the infinite that inhabits the human heart. That of young people who really want to live as 'originals' and not become photocopies of ephemeral fashions ».

Carlo's mother, Antonia Salzano, moved: «We are thrilled that finally Carlo's tomb has been opened, above all because the faithful that Carlo has scattered around the world will be able to see him and be able to venerate him in a stronger and more engaging way. We hope that through the exposition of Carlo's body the faithful can raise their prayers to God with more fervor and faith who through Carlo invites us all to have more faith, hope and love for him and for our brothers just like Carlo did. in his earthly life. We pray that Charles will intercede for all of us with God and obtain many graces for us ».

Edited from https://www.lanazione.it/
Posted by Jesus Caritas Est at 9:04 AM