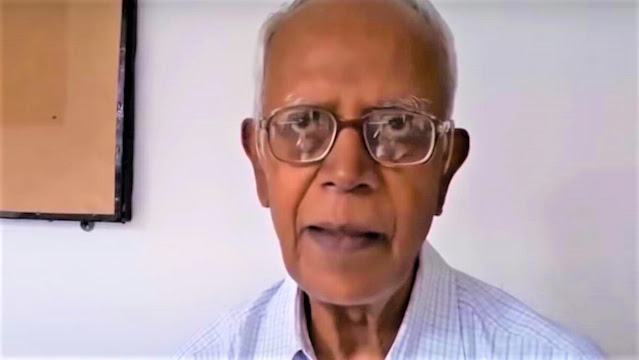 Vatican News reports that Fr. Swamy was denied bail during a court hearing. The president of the Catholic Bishops’ Conference of India (CBCI), Cardinal Oswald Gracias of Bombay said, “We pray that justice be done, that he be peaceful, keep good health and we pray that he is released soon.”

October 22, 2020 — Fr. Stan Swamy, SJ, was expecting his arrest. Over the summer, he was interrogated multiple times by India’s National Investigation Agency (NIA), and his home was raided. “I’m not a silent spectator,” he said in a video recorded on October 6. “I’m part of the game and ready to pay the price whatever be it.”

Two days later, Fr. Swamy was arrested by the NIA for alleged involvement with “Maoist rebels and terrorists.” He denies these allegations. Fr. Swamy is one of 16 human rights activists arrested on similar charges in recent months.

At 83 years old, Fr. Swamy has spent the last 50 years ministering to India’s poorest and marginalized communities. He lives and works at a Jesuit social action center in the west of India, among the Adivasi Indigenous peoples. Fr. Swamy has documented the systemic erosion of Adivasi land rights by the Indian government. He argues that the Indian government has abused its power by falsely imprisoning thousands of Adivasi activists. Many believe this outspoken dissent is the real reason for Fr. Swamy’s arrest.

According to a statement from the Social Justice and Ecology Secretariat (SJES) for the Society of Jesus, Fr. Swamy is committed to peaceful dissent. “He always dared to speak truth to power and expose the large-scale abuse of power using anti-terror and sedition laws and land grabbing without due process of consultation as required,” says SJES secretary Fr. Xavier Jeyaraj, SJ.

Across the globe, Jesuit communities are demanding the release of Fr. Swamy and his colleagues through the Jesuit Conference of South Asia’s #StandwithStan Campaign. Nearly 60,000 people have signed a petition calling for the immediate release of the 16 detainees.

In a letter to the Canadian Minister of Foreign Affairs, Jesuit Provincial Fr. Erik Oland, SJ, said: “Canada aspires to be a leader in the promotion and advancement of human rights in the international stage. We cannot espouse these principles and values as a nation and do nothing in this case.”

Fr. Swamy’s case is part of a larger crackdown on human rights advocacy across India, according to the UN High Commissioner for Human Rights, Michelle Bachelet. “I am concerned that vaguely defined laws are increasingly being used to stifle these voices,” and “to deter or punish NGOs for human rights reporting and advocacy that the authorities perceive as critical in nature,” she said in a statement released on October 20.

NIA officials say Fr. Swamy will not be released until at least October 23 — even as concerns mount over his health. Fr. Swamy suffers from Parkinson’s disease, making him especially vulnerable to COVID-19, which has spiked across India in recent weeks.

“What is happening to me is not something unique happening to me alone,” Fr. Swamy said in his final video testimony. “It is a broader process that is taking place all over the country. We are all aware how prominent intellectuals, lawyers, writers, poets, activists, students, leaders, they are all put into jail because they have expressed their dissent or raised questions about the ruling powers of India. We are part of the process. In a way I am happy to be part of this process.”

HE WAS FIGHTING FOR TRIBAL RIGHTS ! THIS IS THE STATE OF DALIT AND TRIBALS IN INDIA ! IF A PASTOR CAN BE KILLED - THEN WHAT OF THE TRIBALS ?

NIA IS A CRIMINAL ORGANISATION OF SCUM – WHO DESERVE TO BE DESTROYED !

SOME CASES OF HUMAN RIGHTS VIOLATIONS AND CORRUPTION BY THE NIA

NIA IS ALSO AN ORGANISATION OF CHORS AND BLACKMAILERS.EXAMPLE OF CORRUPTION BY NIA SP AND 2 OTHERS

NIA INDICTS ITS OWN FOR CORRUPTION

NIA IS ALSO A NIKAMMA ORGANISATION .SOME CASES OF FAILED NIA INVESTIGATIONS

SAMIR SARDANA said…
If there is NIA there will be retribution - whether from ISIS or any others !

Jalandhar fast track court acquitted Manjit, seven others in a case registered against them under UAPA at Bhogpur police station in Jalandhar on September 28, 2009

• Court stated “From all this evidence, the prosecution has failed to prove any link of recoveries made from accused or transactions of money with any terrorist act or organisation.Simple statement of DSP Rajinder Singh Sohal that he received secret information is not sufficient to hold the accused having committed or attempted to have committed any such offence”

UAPA case was registered against Kobad Gandhy on January 1, 2010

• The court observed: “In this case, neither any recovery was affected at the instance of accused. Since the prosecution failed to prove that the accused was pertaining to a militant group or he was having any nexus with enemy countries, there is no evidence on record to show the accused was having any link with terrorist activities or militant group. … Supreme Court… has held, that mere membership of a banned organisation cannot incriminate a person..

UAPA and Arms Act on Sept 15, 2013,at Purana Shalla police station in Gurdaspur Gurpreet Singh and 11 others

• The trial court observed: “So many disclosures were recorded to show that he (Gurpreet Singh) had kept concealed and got recovered the ammunition from different parts of the country between November 7 and 9, 2014. It is highly impossible for anyone to move such distances cities in three days. It shows prosecution only wants to implicate him by hook or crook

IN ADDITION,NIA USES THESE DUBIOUS ENQUIRIES TO “DIG DIRT ON AN ACCUSED” AND THEN USE THE INFORMATION TO COERCE AND BLACKMAIL THE ACCUSED – A TRAIT OF HEATHENS AND MENIALS. dindooohindoo
July 10, 2021 at 4:47 PM