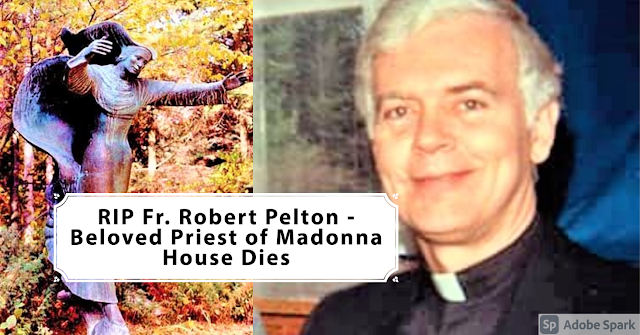 MH Release: Christ is risen! We wish to inform you that our beloved Father Robert Pelton, the first priest ordained for Madonna House Apostolate in 1963, went home to the Lord on Friday, Oct. 16 at 9:20 AM at St. Francis Hospital in Barry's Bay, ON.

Here is a brief Biography (Restoration Magazine) from 2013 when he celebrated his 50th anniversary:

Father Robert Pelton recently celebrated his 50th Anniversary as a priest, the first to be ordained for Madonna House. This is an intimate interview with Fr. Pelton by Emily McPhee.

Can you describe your conversion and what attracted you to the Catholic Faith?

When I was a senior in high school, I had a powerful encounter with God. For many years I had attended a Methodist Sunday school and joined the Methodist Church when I was 12.

When I was 15 or 16, I stopped going to church on Sunday, not in rebellion but probably out of boredom. But I continued to believe in God and in the power of prayer. In my senior year during the most crucial football game of the fall season our team was losing. I left the grandstand to get a cup of coffee, and halfway to the coffee-stand, I stopped and began to pray. "God," I said, "Please let them win. If you let them win, I will go to church every Sunday for the rest of my life."

Suddenly I was in the presence of God. I didn’t have a vision or hear any words. I was simply in the presence of God, the all-holy One. And I said, "I can’t bargain with you. I’ll go to church every Sunday either way, but please let them win." Our team lost, but I had made a sacred promise, and I kept it throughout the rest of my senior year and throughout my first year in university…

By the time my second year in university began, I was a typical sophomore skeptic. I wasn’t an atheist, but I had no ground for belief, and I was very critical of anyone who thought he did. At the same time I was convinced that it was possible to know the truth. But how?

I got the beginning of an answer in my Shakespeare class. The professor, a very Catholic Anglican, was lecturing on "Othello." He pointed out that as Othello was pondering whether to murder Desdemona, who, he believed, had betrayed him, he compared the act of murder to extinguishing the candle burning at her bedside: "Put out the light, and then put out the light…." But the professor took the metaphor a further step. Love is grounded in trust; if trust is extinguished, then love also dies.

I immediately saw the connection to my own skepticism. How could I find the truth if I didn’t trust the possibility of finding it? And under my breath in that crowded lecture hall I said, "God could exist."

"Well, if God exists, what about religion?" I thought, "There must be thousands of religions in the world, but there is only one that I know anything about, so I have to start with Christianity, and that means I have to start with Jesus." So I started with Jesus. I was reading the Gospels, and drawing conclusions, but what was really happening was that the living Lord was revealing himself to me, to my heart…

What happened next was the most improbable—not the most profound or the most beautiful or the most transforming—but the most improbable grace of my life. I was sitting at my roommate’s desk. To distract myself I reached for one of his books, the one closest to my hand. It was Jacques Maritain’s "Art and the Creative Intuition," not the Bible, not a book of theology. I opened the book not to find an answer but to do what I had been doing from the age of six: plunge myself into the nearest book to transcend the uncomfortable here and now.

This is what I read: "…as Christ said to Blaise Pascal of another grace, ‘You would not be seeking me if you had not already found me.’"

I didn’t hesitate for a minute. I got out of the chair, put on my coat, and walked out of my room and down the steps and out to the sidewalk and up three blocks to the St. Thomas More Catholic Center where I asked Fr. O’Brien to sign me up for instructions.

What led you to Madonna House (MH) and the priesthood?

A high-school classmate and friend had discovered MH through her father, a newspaperman, who had come to Combermere from Ohio to fish, and had visited MH to borrow a typewriter. He was not a Catholic, but his daughter, my friend, was, and he told her that she ought to visit because MH was like nothing Catholic that he had ever seen. She did, and her life was radically changed, as was the life of her college roommate (Marilyn) who visited later and decided that MH was her vocation. So when I was on my way into the Church, it seemed to me that a very good way to spend my Easter holiday would be to go to Combermere myself to experience this unusual community…

On Holy Saturday I made my profession of faith and was conditionally baptized in the small upstairs chapel at MH… I could feel the radiance on my face as we celebrated back at MH after Mass…In the morning after brunch some of us walked up Perrier Road. Almost at the top of the hill I turned to the others and said, "I think the Lord wants me to join Madonna House and become a priest."

Do you have a highlight that stands out over these past 50 years as a priest?

Without doubt—being called to intimate friendship with Jesus and dedicated to sharing his life and his word with everyone, but especially the MH family. The joy and the asceticism of this I have experienced especially in offering the Mass daily. As some priest said, "Every day I do one perfect thing."