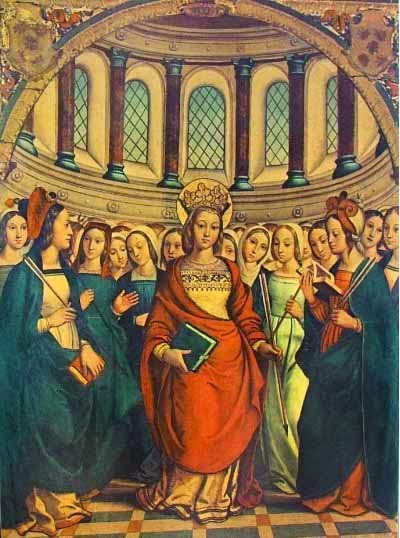 The experiences of Ursula and her eleven thousand companions became the subject of a pious romance which acquired considerable celebrity.  This legendary account is well known: Ursula, the daughter of a Christian king of Great Britain, was asked in marriage by the son of a great pagan king. Desiring to remain a virgin, she obtained a delay of three years. At her request she was given as companions ten young women of noble birth, and she and each of the ten were accompanied by a thousand virgins, and the whole company, embarking in eleven ships sailed for three years. When the appointed time was come, and Ursula's betrothed was about to claim her, a gale of wind carried the eleven thousand virgins far from the shores of England, and they went first by water to Cologne and thence to Basle, then by land from Basle to Rome. They finally returned to Cologne, where they were slain by the Huns in hatred of the Faith. The literary origin of this romance is not easy to determine. Apart from the inscription of Clematius, transcribed in the Passion "Fuit tempore" and paraphrased in the "Regnante Domino" Passion and the "Sermo in natali", the writers seem to have been aware of a Gallic legend of which a late version is found in Geoffrey of Monmouth: the usurper Maximus (as Geoffrey calls the Emperor Maximian), having conquered British Armorica, sent there from Great Britain 100,000 colonists and 30,000 soldiers, and committed the government of Armorica to his former enemy, now his friend, the Breton prince, Conanus Meriadocus. The latter decided to bring women from Great Britain to marry them to his subjects, to which end he appealed to Dionotus, King of Cornwall, who sent him his daughter Ursula, accompanied by 11,000 noble virgins and 60,000 other young women. As the fleet which carried them sailed towards Armorica, a violent storm destroyed some of the ships and drove the rest of them to barbarian islands in Germany, where the virgins were slain by the Huns and the Picts. However, this account has been regarded by several writers since Baronius as containing a summary of the true history of the holy martyrs. Like the Passions of Cologne, it has been subjected to the anti-scientific method, which consists in setting aside as false the improbabilities, impossibilities, and manifest fables, and regarding the rest as authentic history. As a consequence two essential traits remain: the English origin of the saints and their massacre by the Huns; and then, according as adherence is given to the "Sermo in natali", Geoffrey of Monmouth, or the Passion "Regnante Domino", the martyrdom of St. Ursula is placed in the third, fourth, or fifth century. In order to account for all the details, two massacres of virgins at Cologne have been accepted, one in the third century, the other in the fifth. The different solutions with their variations suggested by scholars, sometimes with levity, sometimes with considerable learning, all share the important defect of being based on relatively late documents, unauthoritative and disfigured by manifest fables.As they are now unhesitatingly rejected by everyone, it suffices to treat them briefly. In the twelfth century there were discovered in the Ager Ursulanus at Cologne, some distance from the Church of St. Ursula, skeletons not only of women, but of little children, and even of men, and with them inscriptions which it is impossible not to recognize as gross forgeries.  Although the history of these saints of Cologne is obscure and very short, their cult was very widespread, and it would require a volume to relate in detail its many and remarkable manifestations. To mention only two characteristics, since the twelfth century a large number of relics have been sent from Cologne, not only to neighbouring countries but throughout Western Christendom, and even India and China. The legend of the Eleven Thousand Virgins has inspired a host of works of art, several of them of the highest merit, the most famous being the paintings of the old masters of Cologne, those of Memling at Bruges, and of Carpaccio at Venice. The Order of Ursulines, founded in 1535 by St. Angela de Merici, and especially devoted to the education of young girls, has also helped to spread throughout the world the name and the cult of St. Ursula. Catholic Encyclopedia