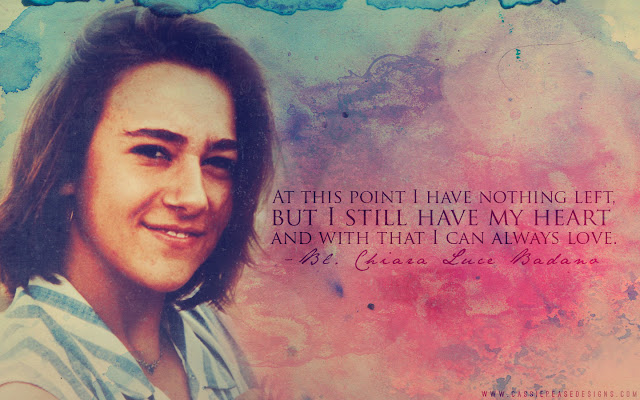 Focolare.org report: There was nothing extraordinary or unusual about the life of Chiara Badano (known as Chiara Luce). And yet for this girl who loved swimming, skiing, listening to music and being with friends, God was always present, beginning with her birth for which Ruggero and Maria Teresa Badano had been praying for eleven years. Then, to their surprise, it happened and Chiara was born on 29 October 1971 in Sassello, in the inlands of Savona, Italy.
Clare was a tenacious girl, someone “outside the box” and always attentive to the “least” among people. In 1981, when she was nine years old, she attended the “FamilyFest” which is a large gathering of the Focolare Movement. It was a revelation for her. She wrote to Chiara Lubich: “I’ve rediscovered the Gospel in a new light. Now I want this book to be the sole purpose of my life!”
Soon, however, Chiara Luce also experienced suffering, especially when despite her effort she had to repeat the first year of high school because of a misunderstanding with a teacher. It was the first time she felt that she could offer God not only her joys, but also the sufferings. She wrote to a friend: “I wasn’t able to give this suffering to Jesus right away. It took a little time to recover.”
When she was seventeen years old, while playing tennis, she felt a stabbing pain in the shoulder. Soon afterwards she made the tragic discovery: osteosarcoma, one of the most ruthless forms of tumour.
It was a hard verdict. When she returned home after the first cancer treatment, Maria Teresa was waiting: “Chiara, how did it go?” But she didn’t even look at her mother and throwing herself on her bed, she remained for a long time gripped by an interior struggle. Only after twenty-five minutes did she return with her usual smile: “Mum, you can talk to me now.” Chiara had said her yes to God and would never turn away from it: “For you, Jesus . . . if you want it, I want it too!” As the treatments became more painful her offering remained firm. Chiara never lost an opportunity to love. “At first we felt like we were going to visit her in order to support her,” a friend recounts, “but quite soon we noticed that whenever we went into her room, the feeling came over us that we were being projected into the splendid adventure of God’s love. And yet, Chiara didn’t say any extraordinary words, she didn’t write pages and pages of diary. She simply loved.”
The more the illness progressed, the more the experience intensified for Chiara. At one point she refused morphine because “It takes away my lucidity” and “I can only offer my pain to Jesus. It’s all I have left.”
Finally, on 7 October 1990, her “departure”. One last smile for Ruggero and then a goodbye for Maria Teresa: “Mamma, be happy, because I’m happy!” There was a huge crowd at the funeral and, as she had requested, Chiara Luce was buried in a white dress, “like a bride going to Jesus”.
Shortly before dying, Chiara Luce exclaimed: “The youth are the future. I can no longer run, but I’d like to pass the Olympic torch on to them. The young people have only one life and it’s worth it to spend it well!” The 25,000 young people who attended her beatification ceremony in Rome on 25 September 2010, demonstrate that Chiara Luce Badano has given witness to a model of holiness that can be lived by everyone!