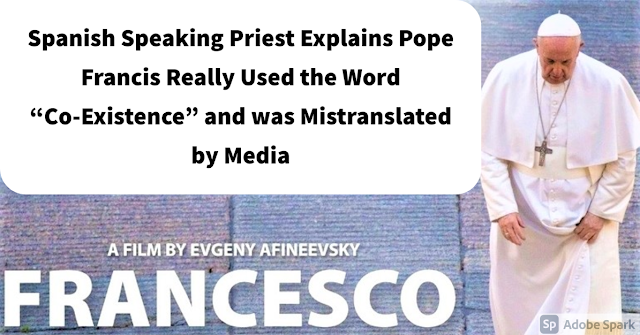 The controversy surrounding Pope Francis' words in the film entitled Francesco has caused a social media storm. The recently released film by Evgeny Afineevsky was heavily edited and used clips out of their context. The specific phrases in the film that have caused much media hype are the following:

“Homosexual people have the right to be in a family. They are children of God and have a right to a family. Nobody should be thrown out or be made miserable over it. What we have to have is a co-existence union law – that way they are legally covered. I supported that.” *

It is important to note that, as Archbishop of Buenos Aires, Pope Francis opposed legislation to endorse same-sex “marriage” in Argentina saying:

“At stake is the identity and survival of the family: father, mother and children. At stake are the lives of many children who will be discriminated against in advance, and deprived of their human development given by a father and a mother and willed by God. At stake is the total rejection of God’s law engraved in our hearts.”

A popular Spanish speaking priest, named Fr. Agustino Torres, CFR, has made a viral Instagram video explaining that the Pope did not use the words "civil union" rather "co-existence" which can also include a brother and sister living together.

Spanish-speakers are explaining that the Pope has been misquoted and misrepresented by the mainstream media — he did not mention “civil unions”. His words were “convivencia civil”, not “unión civil”. This is  understood to mean that people with same-sex attraction should be protected legally by civil law. So the Pope is talking about a civil coexistence (even perhaps among brother and sister) and not the sponsorship of same-sex unions.

Early in his pontificate he said  “we must be brothers” to homosexuals. He then said: “If a person is gay and seeks God and has goodwill, who am I to judge him?” What he did not say is solely: “who am I to judge?” He spoke of being non-judgmental towards a soul created by God.

*Here are the sentences from the film in Spanish :