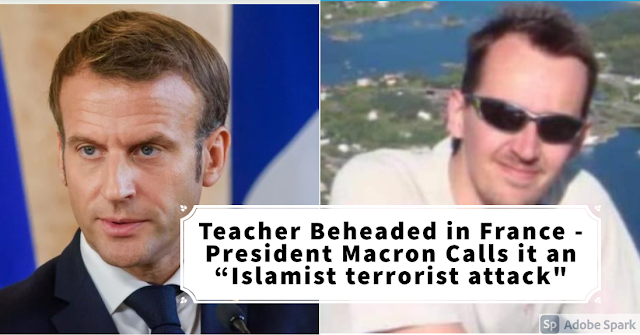 In France, near Paris, an 18-year-old man beheaded his 47-year-old teacher, Samuel Paty, of history and geography. The President of France called this an ‘Islamist terrorist attack'

The  teacher had showed some satirical cartoons about Mohammad during a lecture on freedom of expression. The student, of Chechen origin, shouted "Allah Akhbar" before beheading the teacher. He was subsequently killed by the police a few hours later.

The killing took place on Saturday, October 16, 2020 around 5 pm, near the school of Bois d'Aulne, at Conflans-Sainte-Honorine, 36 km northwest from Paris.

The 18-year-old was born in Moscow and was of ethnic Chechen origin.

The cartoons were the same that were published in 2015 by the weekly Charlie Hebdo.

The same drawings stimulated an attack of the newspaper's office in which 12 people were killed, including journalists and cartoonists.

Eyewitnesses say that the young killer shouted "Allah Akhbar", God is greatest, while attacking the teacher with a knife.

According to reports, the student repeated "Allah Akhbar" when police shouted at him to surrender. The officers then shot him and he died soon after.

Some of the students reported that, prior to showing the cartoons on Muhammad, he told Muslim students they could leave the classroom for a while if they felt offended.

Education Minister Jean-Michel Blanquer said the killing of a teacher was an attack on the French Republic.

Posted by Jesus Caritas Est at 8:39 AM