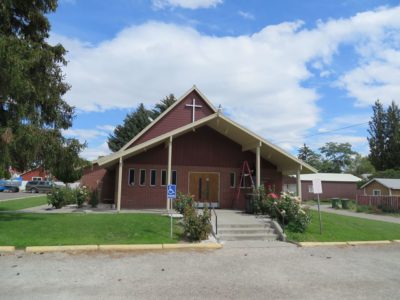 2 Churches in Brewster, Washington, USA were set on fire. The Brewster Police Department reported that a Baptist church in Brewster was set on fire right after an attempted arson at Sacred Heart Catholic church one block away.  The two fires at the churches in Brewster occurred on Sunday, November 15, 2020 in the morning.
The fire at New Testament Baptist Church left the building with extensive damage. However, the other fire at Sacred Heart Catholic Church left minimal damage. Both cases are currently under investigation, according to Brewster Police Department.
The fire at Sacred Heart Catholic Church has been ruled intentional by investigators. Greg Thorn, pastor of Calvary Baptist Church in Brewster, Thorn worries the damage rendered the building beyond salvage. Sacred Heart’s pastor, Fr. Pedro Bautista, said there was evidence that someone tried to burn Sacred Heart Catholic Church, including a broken window and an ignition device. The Spokesman Review reports, Fr. Bautista said, “But for some reason it didn’t catch,” calling it “divine intervention.” The church had damage to the window, a nearby chair and part of the carpet.  The Diocese of Spokane tweeted Sunday prayers for the Brewster community.

Please offer prayers for the community in Brewster. Last evening the Baptist
church burned down in an apparent arson. Fr. Pedro Bautista, pastor of Sacred Heart in Brewster, discovered an attempt was also made on Sacred Heart. Thankfully the parish sustained only minimal damage.

Fr.  Bautista said he is offering their extra building to New Testament Church if they need a place to worship.
Image Soruce: https://sacredheartbrewster.org/photos/