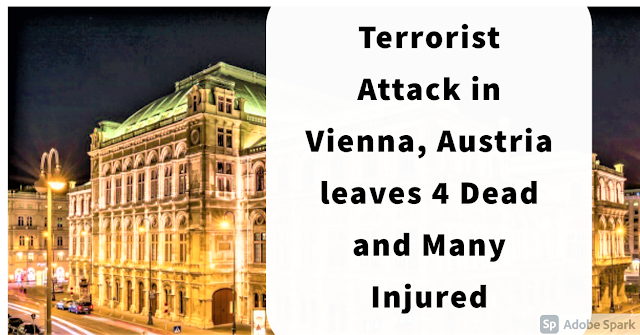 "Deeply concerned, I turn to you at this dark hour. The republic and our people were the target of a brutal terrorist attack yesterday. Our condolences go out to the relatives of the victims, to all the wounded and to all people who suffered severe physical and emotional wounds as a result of this attack ", said Federal Chancellor Sebastian Kurz in his address after the special session of the government on the occasion of yesterday's terrorist attack in Vienna.

Vatican News reports that, "Deeply affected, the Holy Father Francis learned of the violent acts in Vienna that have brought death and pain to innocent people". He expresses his closeness to all the wounded, and prays for their prompt recovery." "Pope Francis entrusts the victims to God's mercy and implores the Lord that violence and hatred cease and that peaceful coexistence in society be promoted. From his heart, His Holiness accompanies those affected by this tragedy with his Blessing." "They were attacking the guests of bars and pubs. People were jumping and running, falling over the tables, running inside the bars followed by the gunmen also running inside the bars," he told London radio station LBC.

Austrian police have urged people to stay indoors as they look for suspects after the gun attack in the capital Vienna that killed four people.

A gunman shot dead by police has been identified as a 20-year-old  terrorist who was released early from jail in December. He was jailed for 22 months in April 2019 after trying to get to war-torn Syria to join Islamic State (IS) jihadists, according to Interior Minister Karl Nehammer.

The man was originally from North Macedonia and had a previous conviction for terrorist association, Mr Nehammer said. He had both Austrian and North Macedonian citizenship.

Two men and two women died of their wounds after gunmen opened fire at six locations in the city centre on Monday evening.

Austrian Chancellor Sebastian Kurz said the four who died were an elderly woman, an elderly man, a young male pedestrian and a waitress.

Mr Nehammer urged Austrians to "please stay at home if possible" during the police operation and "avoid the inner city". Children should stay at home, not go to school on Tuesday, he said.

Several arrests were made during searches of 15 nearby homes.

Mr Nehammer said at least one "heavily armed and dangerous" attacker was believed to be still at large. Officials said there could have been as many as four attackers.

One policeman was shot and critically wounded before the attacker, armed with an automatic rifle, a pistol and a machete, was, in the police chief's words, "neutralised".

Sources: Edited from BBC and https://www.bundeskanzleramt.gv.at/bundeskanzleramt/nachrichten-der-bundesregierung/2020/bundeskanzler-kurz-terrorismus-mit-allen-mitteln-entgegentreten-grundwerte-und-demokratie-gemeinsam-verteidigen.html