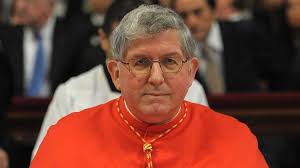 "At a recent meeting of the Toronto Catholic District School Board a member of a delegation attempted to quote from the section of the catechism of the Catholic Church which contains the teaching and the Pastoral practice of the Church in caring for our brothers and sisters who experience same-sex attractions. Shortly after he had begun reading the quotation he was interrupted and it was suggested that to continue reading from the catechism was to be treading in dangerous waters and would be putting down a marginalized and vulnerable community and that the language of the catechism is not proper," wrote Cardinal Collins in a letter after the incident. (See Video)
“That a Catholic should be criticized, and effectively be prevented by Catholic trustees from reading from the Catholic Catechism at a meeting of a Catholic School Board is reprehensible,” said Cardinal Collins.
“The world in which we live is dominated by a shallow secular vision of the human person, and of the purpose of life, a vision which is contrary to divine revelation, to reason, and to the profound heritage of Christian faith. It is disappointing when Catholic trustees allow that secular vision to replace the fullness of faith articulated in the Catechism of the Catholic Church. We are called to be guided by the Holy Spirit, not by the deceptive spirit of the age,” Cardinal Collins wrote. “If Jesus Himself were to attend a meeting of the Toronto Catholic District School Board, I wonder if He would be interrupted, if he were to begin to say: ‘Repent, for the Kingdom of God is near,’ or many other things He says in the Gospel, because those words are perhaps not sufficiently soothing, and perhaps might offend.”
FULL TEXT Letter available at Source: https://www.corriere.ca/wp-content/uploads/The-Letter.pdf