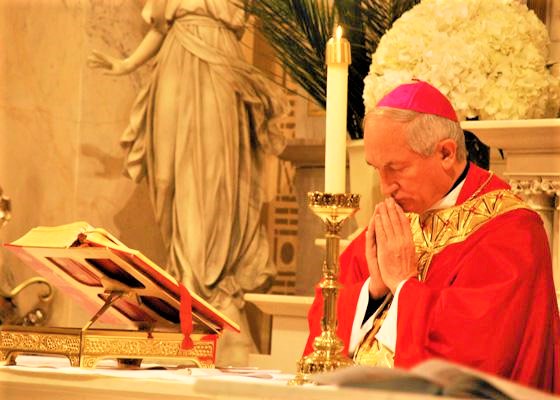 Vatican News reports that the Pope appointed  Cardinal-designate Tomasi Special Delegate to Order of Malta.
Pope Francis appoints soon to be Cardinal, Silvano Maria Tomasi, Special Delegate to the Sovereign Order of Malta. He succeeds Cardinal Angelo Becciu who resigned in October.
By Vatican News staff writer
Archbishop Silvano Maria Tomasi was appointed by Pope Francis on Sunday to be his Special Delegate to the Sovereign Order of Malta. It will be his responsibility to act as interlocutor for the Order’s government in the reform process of its Constitutional Charter and Code.
Archbishop Tomasi, who will be raised to the rank of Cardinal during the Consistory on 28 November, has also been instructed to receive the oath of the person who will be elected Grand Master of the Order of Malta on 8 November, at the end of the Council Complete of State.
80-year-old Tomasi, a naturalized American citizen, is a Scalabrinian priest with a long experience in the diplomatic service of the Holy See. He is the former Permanent Observer to the United Nations in Geneva and he collaborates with the Dicastery for the Promotion of Integral Human Development.
In his letter to Archbishop Tomasi on Sunday, 1 November, Pope Francis writes: “I nominate you as my Special Delegate to the Sovereign Military Hospitaller Order of St. John of Jerusalem, Rhodes and Malta (S.M.O.M.), with the task of collaborating, for the greater good of the Order.”
He continued saying “You will “enjoy all the powers necessary to decide any questions that may arise for the implementation of the mandate entrusted to you, to receive the oath of the next Grand Master, and you will be my exclusive spokesperson for all that pertains to relations between this Apostolic See and the Order.”
The Sovereign Order of Malta is a lay religious order of the Catholic Church since 1113 and a subject of international law. It has diplomatic relations with over 100 states and the European Union, and permanent observer status at the United Nations.
Today, the Order of Malta is active in 120 countries caring for people in need through its medical, social and humanitarian works. It is especially involved in helping people living in the midst of armed conflicts and natural disasters by providing medical assistance, caring for refugees, and distributing medicines and basic equipment for survival.
FULL TEXT Release: VaticanNews.va