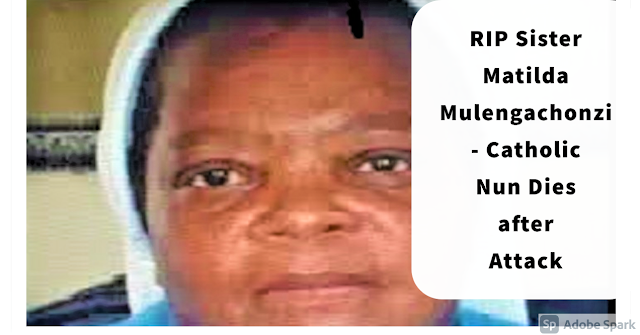 AFRICA/ZAMBIA - A nun dies due to her serious injuries after an attack on her parish
Tuesday, 3 November 2020
Lusaka (Agenzia Fides) - Sister Matilda Mulengachonzi, one of the two sisters of the Congregation of the Little Servants of Mary Immaculate (LSMI), died of injuries inflicted two months ago in an armed attack on the parish where she served in Zambia.
Sister Matilda, 60, died on Sunday 25 October, after the religious woman suffered deep cuts on her forehead and head, and a serious injury to her eye during the attack. The Provincial Superior Sr. Sylvia Kagulura, in commemorating the loss of the nun who was buried on October 28 in the cemetery in Kasisi, said: "Our community is still waiting for the results of the police investigation". In their message of condolences to the LSMI congregation, the Bishops of Zambia called the attack "cruel and violent" and entrusted Sister Matilda's soul to divine mercy: "We pray that the Good Lord may consider her 41 years of religious life and her selfless services as a teacher and treasurer of the Chalice program". Sister Matilda was seriously injured on the evening of August 24, when an armed bandit entered the parish of St. Barbara, in the diocese of Monze. The criminal took Sister Okafor Assumpta, 49, and Sister Matilda Mulengachonzi by surprise. "Sister Matilda suffered deep cuts on her forehead and head, with a serious eye injury, while Sister Assumpta suffered a deep cut on her head after the criminal hit them with an iron bar. The two victims had surprised the burglar when he tried to break into the monastery", a police spokeswoman reported. The nuns were admitted to the Itezhi-tezhi district hospital and then tranferred to the University Teaching Hospital (UTH). Sister Okafor was discharged soon after, while Sister Matilda remained hospitalized in the intensive care unit, where she later passed away. (L.M.) (FULL TEXT Release: Agenzia Fides, 3/11/2020)

Unknown said…
May she rest in peace.

Eternal rest grant unto her,

shine upon her. May the souls

of all the faithful departed, through

the mercy of God, rest in peace.