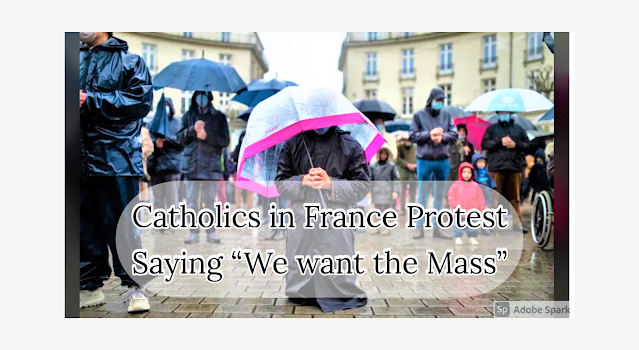 In twenty cities in France this weekend, hundreds of Catholics gathered in front of their churches to demand the return of public services, suspended since Monday, November 3, 2020.

The Catholics were for the most part families and young people. They demanded the return of public mass as soon as possible, and this, before the end of the lock-down. Their argument: community celebrations and the Eucharist are vital needs for the faithful, spiritual nourishment has been wrongly discredited, in their eyes, by the public authorities.

Their banners read “Let us Pray” and “We Want the Mass,” in demonstrations around France on Sunday.

In the western city of Nantes, hundreds gathered in front of a statue of the Virgin Mary, some kneeling while it rained. Other protests occurred in the city of Strasbourg, Bordeaux, and outside the Saint-Louis Cathedral in Versailles.

Devout Catholics sang hymns and protested for hours at Saint-Sulpice Church in Paris. The Paris police said the protesters didn’t respect social distancing and violated an order against praying in the streets, so they banned a similar rally planned for Sunday.

Edited from La-Croix and ABC News

With more confirmed virus cases in than any other European country, predominantly Roman Catholic France banned Mass and other religious services for the month of November as part of nationwide partial lockdown measures aimed at reining in infections and relieving pressure on hospitals. Churches and other religious sites remain open for individual visitors to come and pray.

The vicar general of the Paris archdiocese, Benoist de Sinety, called Mass “a vital necessity” and called it a kind of “suffering to not be able to go.”

Interior Minister Gerald Darmanin appealed to believers to watch services online and avoid public gatherings while the lockdown is place. In a statement published on Twitter, he said he would meet Monday with religious leaders to discuss how the government may eventually open up services again.