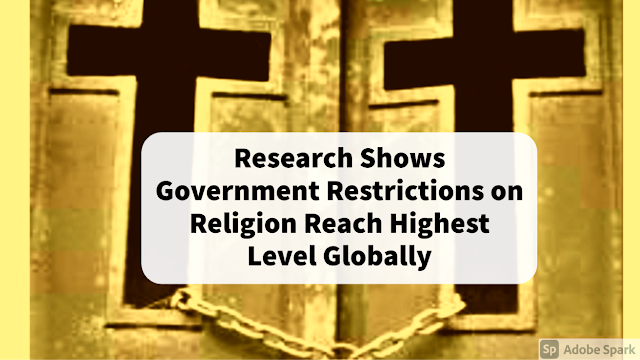 How we did this

In 2018, the global median level of government restrictions on religion – that is, laws, policies and actions by officials that impinge on religious beliefs and practices – continued to climb, reaching an all-time high since Pew Research Center began tracking these trends in 2007.

The year-over-year increase from 2017 to 2018 was relatively modest, but it contributed to a substantial rise in government restrictions on religion over more than a decade. In 2007, the first year of the study, the global median score on the Government Restrictions Index (a 10-point scale based on 20 indicators) was 1.8. After some fluctuation in the early years, the median score has risen steadily since 2011 and now stands at 2.9 for 2018, the most recent full year for which data is available.

The increase in government restrictions reflects a wide variety of events around the world, including a rise from 2017 to 2018 in the number of governments using force – such as detentions and physical abuse – to coerce religious groups.

The total number of countries with “high” or “very high” levels of government restrictions has been mounting as well. Most recently, that number climbed from 52 countries (26% of the 198 countries and territories included in the study) in 2017 to 56 countries (28%) in 2018. The latest figures are close to the 2012 peak in the top two tiers of the Government Restrictions Index.

Out of the five regions examined in the study, the Middle East and North Africa continued to have the highest median level of government restrictions in 2018 (6.2 out of 10). However, Asia and the Pacific had the largest increase in its median government restrictions score, rising from 3.8 in 2017 to 4.4 in 2018, partly because a greater number of governments in the region used force against religious groups, including property damage, detention, displacement, abuse and killings.

In total, 31 out of 50 countries (62%) in Asia and the Pacific experienced government use of force related to religion, up from 26 countries (52%) in 2017. The increase was concentrated in the category of “low levels” of government use of force (between one and nine incidents during the year). In 2018, 10 Asia-Pacific countries fell into this category, up from five the previous year. (For a full list of countries in the Asia-Pacific region, see Appendix C.)

In Armenia, for example, a prominent member of the Baha’i faith was detained on religious grounds, according to members of the community.1 And in the Philippines, three United Methodist Church missionaries were forced to leave the country or faced issues with visa renewals after they were involved in investigating human rights violations on a fact-finding mission.2

But the region also saw several instances of widespread use of government force against religious groups. In Burma (Myanmar), large-scale displacement of religious minorities continued. During the course of the year, more than 14,500 Rohingya Muslims were reported by Human Rights Watch to have fled to neighboring Bangladesh to escape abuses, and at least 4,500 Rohingya were stuck in a border area known as “no-man’s land,” where they were harassed by Burmese officials trying to get them to cross to Bangladesh.3 In addition, fighting between the Burmese military and armed ethnic organizations in the states of Kachin and Shan led to the displacement of other religious minorities, mostly Christians.4

Meanwhile, in Uzbekistan, it is estimated that at least 1,500 Muslim religious prisoners remained in prison on charges of religious extremism or membership in banned groups.5

Some countries in the Asia-Pacific region saw all-time highs in their overall government restrictions scores. This includes China, which continued to have the highest score on the Government Restrictions Index (GRI) out of all 198 countries and territories in the study. China has been near the top of the list of most restrictive governments in each year since the inception of the study, and in 2018 it reached a new peak in its score (9.3 out of 10).

The Chinese government restricts religion in a variety of ways, including banning entire religious groups (such as the Falun Gong movement and several Christian groups), prohibiting certain religious practices, raiding places of worship and detaining and torturing individuals.6 In 2018, the government continued a detention campaign against Uighurs, ethnic Kazakhs and other Muslims in Xinjiang province, holding at least 800,000 (and possibly up to 2 million) in detention facilities “designed to erase religious and ethnic identities,” according to the U.S. State Department.7

Tajikistan also stands out with a GRI score of 7.9, an all-time high for that country. In 2018, the Tajik government amended its religion law, increasing control over religious education domestically and over those who travel abroad for religious education. The amendment also requires religious groups to report their activities to authorities and requires state approval for appointing imams. Throughout the year, the Tajik government continued to deny minority religious groups, such as Jehovah’s Witnesses, official recognition. In January, Jehovah’s Witnesses reported that more than a dozen members were interrogated by police and pressured to renounce their faith.8

While these are examples of countries with “very high” government restrictions on religion in Asia and the Pacific, there also are several notable countries in the “high” category that experienced an increase in their scores. India, for example, reached a new peak in its GRI score in 2018, scoring 5.9 out of 10 on the index, while Thailand also experienced an all-time high (5.4).

In India, anti-conversion laws affected minority religious groups. For example, in the state of Uttar Pradesh in September, police charged 271 Christians with attempting to convert people by drugging them and “spreading lies about Hinduism.” Furthermore, throughout the year, politicians made comments targeting religious minorities. In December, the Shiv Sena Party, which holds seats in parliament, published an editorial calling for measures such as mandatory family planning for Muslims to limit their population growth. And law enforcement officials were involved in cases against religious minorities: In Jammu and Kashmir, four police personnel, among others, were arrested in connection with the kidnapping, rape and killing of an 8-year-old girl from a nomadic Muslim family, reportedly to push her community out of the area.9

In Thailand, as part of broader immigration raids in 2018, the government arrested hundreds of immigrants who allegedly did not have legal status, including religious minorities from other countries who were seeking asylum or refugee status. Among the detainees were Christians and Ahmadi Muslims from Pakistan as well as Christian Montagnards from Vietnam. During the year, Thai authorities also detained six leading Buddhist monks, a move that the government said was an effort to curb corruption but that some observers called a politically motivated attempt to assert control over temples.10