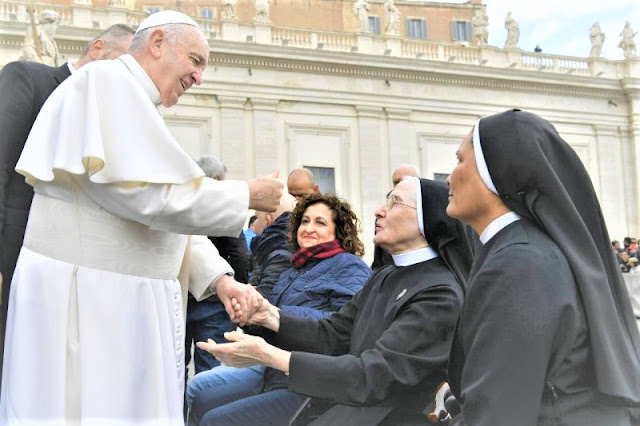 Vatican News reports that Pope Francis, with an Apostolic Letter issued motu proprio, and entitled Authenticum charismatis, has modified Canon 579 of the Code of Canon Law concerning the erection of institutes of consecrated life.

With this amendment, new institutes of consecrated life and societies of apostolic life must receive written approval by the Apostolic See, which alone has final judgment as regards their erection. Previously the law stated that Diocesan Bishops could establish new institutes with prior consultation with the Holy See.

BY THE SUPREME PONTIFF

AMENDING CANON 579 OF THE CODE OF CANON LAW

" A sure sign of the authenticity of a charism is its ecclesial character, its ability to be integrated harmoniously into the life of God’s holy and faithful people for the good of all". (Apostolic Exhortation Evangelii gaudium, 130). The faithful have the right to be warned by the Pastors about the authenticity of charisms and the reliability of those who present themselves as founders.

Discernment about the ecclesial nature and reliability of charisms is an ecclesial responsibility of the Pastors of the particular Churches. It is expressed in close care for all forms of consecrated life and, in particular, in the decisive task of assessing the advisability of establishing new Institutes of Consecrated Life and new Societies of Apostolic Life. It is right to respond to the gifts the Spirit awakens in the particular Church, welcoming them generously with thanksgiving; at the same time, it must be avoided that “communities may be needlessly brought into being which are useless or which lack sufficient resources” Decree of the Vatican Ecumenical Council II, Perfectae caritatis, 19).

It is the responsibility of the Apostolic See to accompany the Pastors in the process of discernment leading to the ecclesial recognition of a new Institute or a new Society under diocesan law. The Apostolic Exhortation Vita consecrata states that the vitality of new Institutes and Societies "must be judged by the authority of the Church, which has the responsibility of examining them in order to discern the authenticity of the purpose for their foundation and to prevent the proliferation of institutions similar to one another, with the consequent risk of a harmful fragmentation into excessively small groups” (12). The new Institutes of Consecrated Life and the new Societies of Apostolic Life, therefore, must be officially recognised by the Apostolic See, which alone has final judgement.

The act of canonical erection by the Bishop transcends the solely diocesan sphere and makes it relevant to the wider horizon of the universal Church. In fact, by its very nature, every Institute of Consecrated Life or Society of Apostolic Life, even if it has arisen in the context of a particular Church, "as a gift to the Church, is not an isolated or marginal reality, but deeply part of her. It is at the very heart of the Church, a decisive element of her mission" (Letter to Consecrated Persons, III, 5).

With this in mind, I have decided to modify can. 579, which is replaced by the following text:

I order that what has been deliberated with this Apostolic Letter in the form of Motu proprio have firm and stable implementation, notwithstanding anything to the contrary, even if worthy of special mention, and that it shall be promulgated by publication in L'Osservatore Romano, coming into force on 10 November 2020, and then published in the official commentary of the Acta Apostolicae Sedis.

Given from the Lateran Palace, on 1 November 2020, the Solemnity of All Saints, the eighth of my Pontificate.